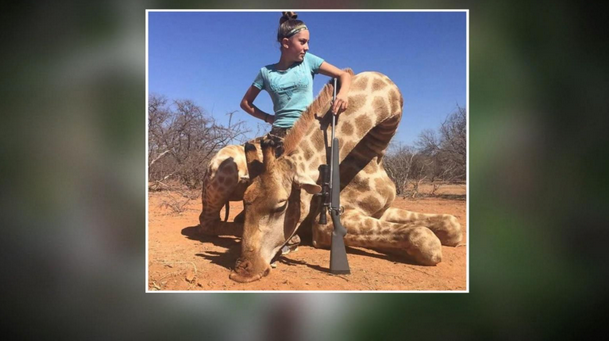 A 12-year-old girl has sparked controversy after posting photos of herself with dead game that she and her father have killed.

Aryanna Gourdin and her father, Eli Gourdin, visited South Africa to participate in trophy hunts. Aryanna posted a photo of herself on Facebook posed with a dead zebra. Her caption read, “One of my dream hunts for sure.”

“It’s something I cherish and enjoy, and I want other people to see what I experienced,” she said.

One of Aryanna’s Facebook photos received over 73,000 comments, with many speaking out against the sick hunts. Some extreme comments threatened that lives of the father and his daughter.

Aryanna acknowledged the controversy in a post: “My last profile picture was very offensive to others and I have learned my lesson with that pose, I apologize.”

Eli Gourdin insisted that the hunting farm offered the giraffe to them for the hunt as it posed problems for other animals: ”They actually had an older giraffe that was eating up valuable resources other giraffes need to survive.” He also claims that they donated the meat from the animals to a local village in order to feed 800 orphans.

Aryanna is determined to not let “the haters” prevent her from her “sport”: “I would never back down from hunting. I am a hunter, and no matter what people say to me, I’m never going to stop.”

As was done in Sochi, Russia, before the 2014 Winter Olympics, stray dogs were reportedly being killed recently in 11 Russian cities that will host the World...
Read more
News

In a little known about tradition, horrifically, each year thousands of teenage boys in Togo, Africa, go into isolation for a full week to...
Read more
News

This picture from International Animal Rescue, released yesterday, shows Utu the orangutan being carried after being rescued from villagers who had kept him as...
Read more
Load more