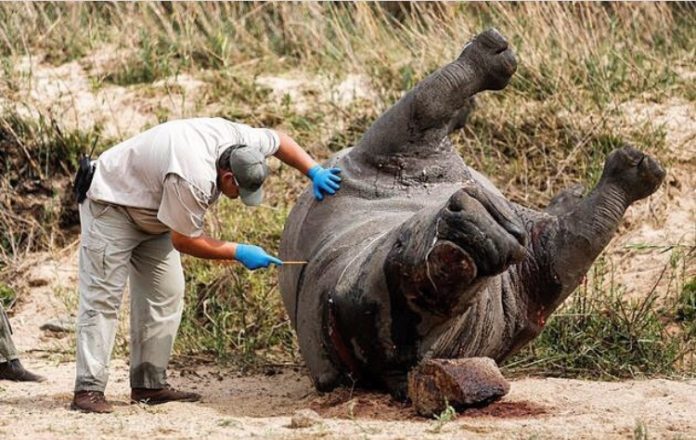 The bodies of three alleged rhino poachers were removed from the Hluhluwe-iMfolozi Park in northern KwaZulu-Natal on Thursday after an intense shootout.

Rhino poaching has been on the increase in the northern KZN reserve‚ with 21 killed so far this month.

Tragically, 115 rhinos have been killed in KZN since the beginning of 2016.

“An intensive three-hour joint operation took place yesterday to recover the bodies of three alleged poachers‚” said IPSS spokesman Candace Grobler. “Rescuers recovered the bodies of the poachers from a deep ravine in the bush of Hluhluwe game reserve. The deceased were accessed on foot after the rescuers were dropped off by a SANDF Oryx helicopter. The deceased were carried out of the dense bush by the rescuers to a staging area where they were winched up into the airframe before being flown out‚” said Grobler.

According to KZN Ezemvelo Wildlife spokesman Musa Mntambo‚ 91 poachers had been arrested in 2016 compared to 49 in 2015.

Here’s Some Pawsitivie News! Cat Missing For 46 Days After The Hualien Earthquake In Taiwan Is Found & Reunited With His Family

March is ending on a far more positive note than February began for a pet parent and cat that were reunited in Taiwan this...
Read more
News

Hot Dogs Are Beating The Heat In The Coolest Way At Indoor Snow Center In Manchester, England!

Photos from Chill Factore, Facebook Some of the coolest dogs in the world had the opportunity to escape the heat recently courtesy of an indoor...
Read more
News

Dog Rescued From Near Death By Animal Aid

Every living being deserves compassion & kindness! This just proves what a little love & care can really do to save a life! 💞 Great...
Read more
Load more