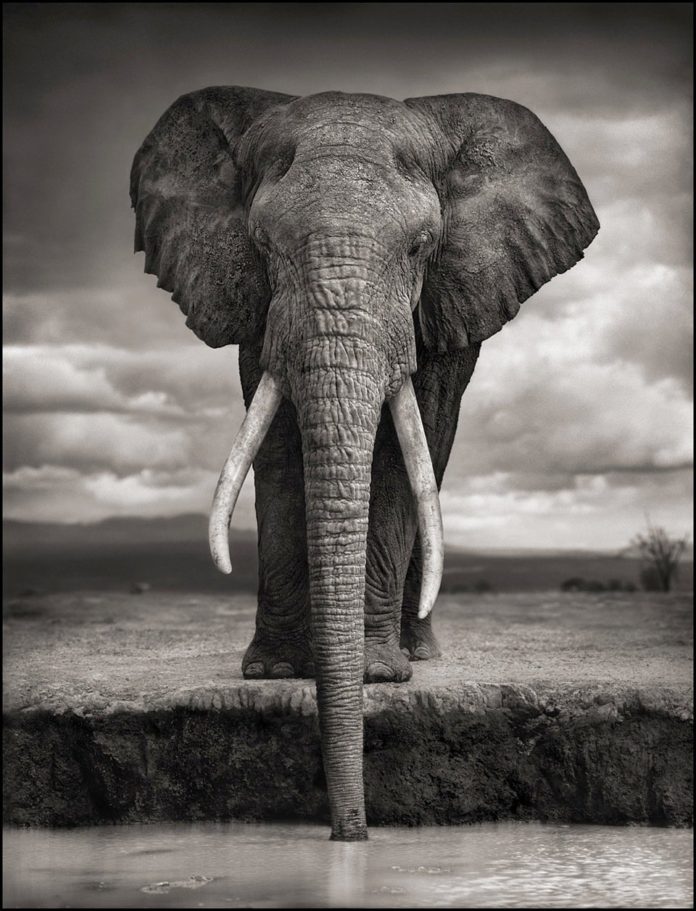 BRUSSELS, Belgium – In 25 years, there may not be a single elephant remaining in Africa if current rates of killing continue.

Elephants are experiencing catastrophic declines from poaching. From 2010 to 2012, at least 100,000 elephants were killed in Africa for their ivory, many of them in AEC countries.

“The situation is alarming in most of our countries,” says Azizou El Hadj Issa, former Minister of Agriculture in Benin and President of the Council of Elders of the African Elephant Coalition.

“Elephants are slaughtered every day, rangers are being killed and the trade is fueling terrorism which destabilizes the continent and has huge repercussions for EU security,” he warned. “We need the EU to support us and become part of the solution to this crisis. We, the Africans, have that solution and we call on the EU and its member States to throw their support behind our proposals.”

In Brussels last week, a delegation of the African Elephant Coalition met with several high level officials of the European Commission and of EU member States to seek support for their five-part package to put an end to the ivory trade and afford elephants the highest protection under international law.

The African Elephant Coalition is calling on the EU to extend its commitment toward implementing the African Elephant Action Plan, adopted by all African elephant range states in 2010, by supporting the listing of all African elephants in Appendix I under the Convention on International Trade in Endangered Species, CITES, as a way to enhance the unity of African nations with respect to elephants and elephant conservation.

CITES entered into force in 1975, and accords varying degrees of protection and regulation of international trade to more than 35,000 species of animals and plants. Currently 182 countries are Parties to the Convention.

The 17th Conference of the Parties to CITES (CoP17) will be held in Johannesburg, South Africa from September 24 to October 5. The Conference meets every three years.

One of the proposals seeks to unify all African elephant populations and their range States in one Appendix I listing. Trade in species listed on Appendix I is prohibited.

This would provide maximum protection to elephants and end the split-listing by transferring from Appendix II, a less endangered status, the elephant populations of Botswana, Namibia, South Africa and Zimbabwe.

The African elephant as a species is not constrained within national borders, nor are national populations. Many are shared with more than one country.

“The African elephant is a single species and the CITES listing needs to reflect that,” says Andrew Seguya, executive director of Uganda’s Wildlife Authority. “An elephant that wakes up in the morning in Angola as Appendix I could be in Namibia under Appendix II by the same afternoon.”

“Africa and the EU need to work toward the common purpose of saving elephants from extinction,” said Seguya. “All elephants should be placed in Appendix I and we call on the EU to follow through on their commitment for a total ban on the ivory trade and support an African solution to an African problem.”

The five proposals submitted by the African Elephant Coalition to CITES are:

1. Listing all elephants in CITES Appendix I The proposal seeks to unify all African elephant populations and their range States in one Appendix I listing, ending split-listing through the transfer from Appendix II of the populations of Botswana, Namibia, South Africa and Zimbabwe.

2. Closure of domestic ivory markets This proposal calls for closure of all domestic markets for commercial trade in raw and worked ivory. Closing all internal markets in range, transit and end-user consumer countries would reduce opportunities for the laundering of poached ivory, under the guise that it is antique, “pre-Convention” or otherwise legally acquired. It would also reinforce the message that all ivory sales should be stopped, as they are dangerous for elephants.

3. Ivory stockpile destruction and management This proposal builds on two earlier papers submitted to the CITES Standing Committee in 2014 and 2016, which led to recognition by the Committee of the destructions of ivory stockpiles by governments since 2011, and a recommendation to develop guidance on stockpile management. It endorses ivory destruction, encourages the highest possible standards of stockpile management, and requests the CITES Secretariat to provide the best available technical guidance on stockpile inventories, audit, management and disposal, including DNA sampling to determine the origin of items in the stockpile.

4. The Decision-Making Mechanism for a process of trade in ivory  The proposal recommends that the CITES Parties should end negotiations on the Decision-Making Mechanism. In view of the concerted global efforts to reduce demand for ivory, the existence of negotiations on a DMM process to legalize trade sends precisely the wrong message – that a legal and sustainable ivory trade is possible, and could reopen in the not-too-distant future. The DMM not only poses unacceptable risks for elephants, but has also generated valid objections among Parties, as shown by the fact that CITES has been unable to make any progress in negotiations after 9 years.

5. Restricting trade in live elephants The proposal aims to end the export of African elephants outside their natural range, including export to zoos and other captive facilities overseas. Such exports provide no direct benefit to conservation of elephants in their range States, a fact noted by the IUCN-SSC African Elephant Specialist Group, and there are considerable objections within Africa on ethical and cultural grounds. African elephants, along with their ivory, should remain in Africa.

The African Elephant Coalition praised the European Union for adopting the EU Action Plan against Wildlife Trafficking and for urging the 28 EU member states not to issue export or re-export documents for raw ivory from elephants on the basis of EU guidelines.

The African Elephant Coalition was established in 2008 in Bamako, Mali. It includes 29 member African countries united by a common goal: “a viable and healthy elephant population free of threats from international ivory trade.” A meeting in Montreux, Switzerland from June 24-26 was the seventh meeting of the Coalition since it was founded.

March 20th marks the first day of spring, but for almost four decades, it has also been recognized in many cities throughout the world...
Read more
News

The new documentary SANCTUARY is an inspirational and heart-warming glimpse into the lives of our primate brothers and sisters. This beautifully filmed documentary brings the...
Read more
Load more