Orcas Harpooned And Killed While Tourists Look On Horrified, Then Chopped Up For Food

If a picture says 1000 words, then the shocking photos of dead orcas being chopped up for food has horrified people who looked on from a cruise ship in Saint Vincent and the Grenadines, THIS IS SO WRONG on so many levels!

Extremely graphic and disturbing, the photos also serve as an important visual statement that reflects the savagery that is taking place there and the many reasons why it must stop.

According to the Daily Mail, the photos, that were given to MailOnline Travel, show the ugly aftermath of what happened to the orcas, the largest member of the oceanic dolphin family, the day after they were brutally killed.

“The government knows about this issue, however, Saint Vincent and the Grenadines is a recipient of Japanese aid and in exchange, our government votes with Japan at the International Whaling Commission, always in favor of resuming commercial whaling,” said Adam Gravel who took the photos last Friday. “So it’s not in their interest to inform and educate people.”

Gravel, who runs the non-profit, Marine Wildlife Conservation Organization, SalvageBlue, explained that whaling is a big problem there, with the meat being a popular delicacy to many locals.

Saint Vincent and the Grenadines (SVG), a southern Caribbean nation comprising of a main island, St. Vincent, and a chain of smaller islands, is one of the last remaining countries “in the 21st century” where the hunting of whales and dolphins is legal; despite many fruitless campaigns to enforce a ban.

“Another important issue is the damage we are doing to our reputation and our tourism sector because of incidents like these,” Gravel pointed out in The Daily Mail. “’But the biggest problem is simply that we are killing incredibly smart, sentient creatures that deserve to live.” 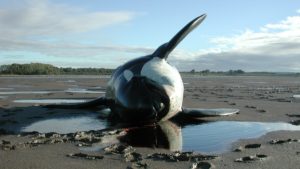 Reportedly, Thomson Cruises cancelled all of its whale and dolphin watching tours in SVG after some of their passengers were traumatized after witnessing the killing of two orcas last week.

The painfully-graphic images show fishermen butchering the recently killed orcas, and then “drying the flesh out before being sold for consumption and boiling the blubber down to extract to oil.

Perhaps most disturbing, is a heart-wrenching photo, captured by Gravel, showing a man cutting into the head of an orca and using a machete to slice off chunks of the large mammal’s flesh; callously leaving the dead animals eyes and teeth as remains.

As also reported in the Daily Mail article, a crew member on one of the whale-watching boats, Ken Isaacs, told iWitnessNews that “many of the passengers, from the TUI Discovery, were deeply disturbed by what they saw” as well as by the “loud explosions” they heard as harpoons were fatally fired into the animals.

Definitely not the relaxing and spectacular experience that people whale-watching sign up for.

Understandably, Isaacs shared that, “the killing moved many whale-watchers to tears.” 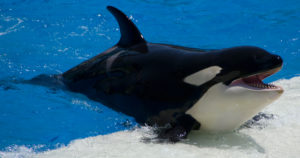 One whale, reportedly, which could be worth several thousands of dollars depending on its size, is reportedly able to feed the entire town; with much of the meat purchased for local consumption while some is exported to the smaller islands nearby.

In 1990, a U.S. Fish and Wildlife Special Agent colleague and I worked in Nevada on a mid-west based suspect offering to sell a...
Read more
News

Beyoncé has adopted a vegan lifestyle again and she took to Instagram on Friday to encourage her 112 million followers to join her. In preparation...
Read more
Industry News

After the heartbreaking deaths of all four elephants held captive at Grant’s Farm who all died within one year - and three within only...
Read more
Load more