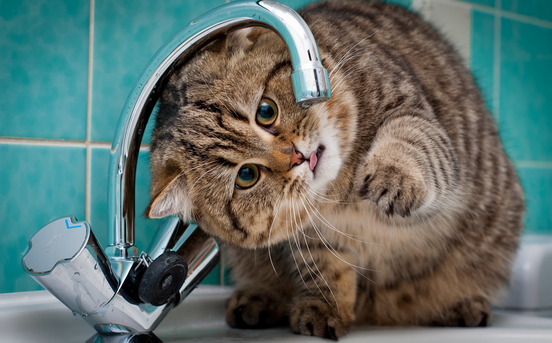 A curious cat caused quite a bit of damage to a Florida Humane Society in Pompano Beach after turning on the water faucet at the shelter. The spunky kitty left the water on full blast for 17 hours, which ultimately flooded the facility.

Staff members initially assumed a water pipe had burst, but then discovered that the 6-month-old kitty was to blame. Since the incident, the kitty has been adopted, but the new owners were forewarned of the animal’s affinity for sinks. 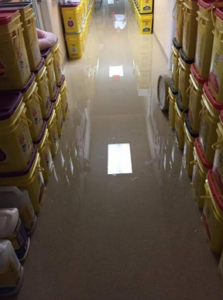 Volunteer Terry Arbour: “We can’t be sure which cat did it, because we don’t have cameras in there, but we have a good idea because there was one younger female cat who really liked playing in sinks. There was a tall spout in that sink that moves around, and the cat somehow was able to turn it on. It’s possible there was collusion from others, but she probably had something to do with it.”

The flood damaged floors, walls, and cabinets, and left three to four inches of standing water in eight rooms, as well as caused a loss of a large amount of cat food and litter. Approximately $5000 in damage was estimated, and many of the 30 cats in the facility have had to be relocated while the repairs are being done.

Fortunately, as the cages are set up high, no cat was injured in the flood.

To DONATE and HELP find foster homes for the felines, VISIT http://floridahumanesociety.org/ or call 954-974-6152.

Approximately 30 Dogs Along With Other Animals Were Rescued From Alleged Cruelty Situation In Kingman County, Kansas

As the Sand fire in Santa Clarity Valley in the Los Angeles area continues to burn, a Lancaster prison is providing shelter for rescue...
Read more
News

Taiji, Japan, Dolphins Stolen from the wild, from sea to stage, where your entertainment comes from. Please DO NOT buy a ticket to a dolphin show or dolphinarium! The...
Read more
Load more