Craiova, ROMANIA: Video footage of a small whimpering pup has surfaced and broken many hearts. The abandoned and previously abused dog featured in the video feared the first affection provided by a kennel caretaker in Romania.

The trauma he has faced made him feel defenseless and petrified when being stroked; he initially shrieked in fear upon the first touch. 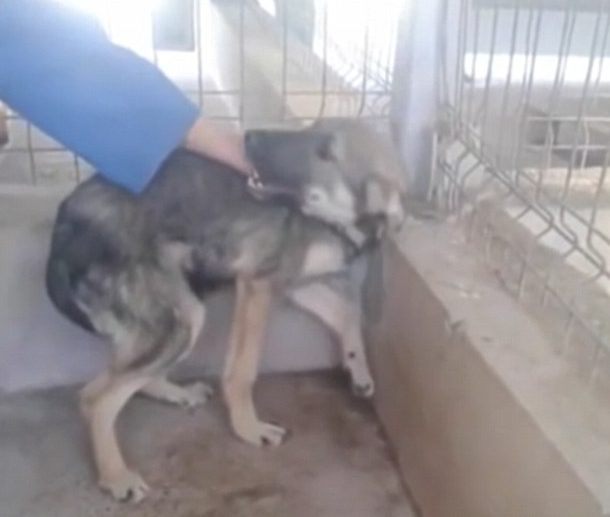 However, after a short period of comforting and soothing touches, his cries become more silent and he began to relax. As the video continues, we see his progress, as he later cuddled up to the handler, began to play, and interacted with another dog.

Although not much is known about the dog’s (now known has Kayne, not Priscilla as previously reported) background, what is known is that he has suffered from tremendous trauma as he was abused when he was younger.

Fortunately, he now has a new home in the UK and is learning to trust again.

Kayne’s Craiova is known as “The European Capital of Canine Cruelty” due to an abusive shelter system. Romanian authorities, in general, are reluctant to apply the law for the protection of animals. Dogs are slaughtered by the government as part of a long-running crackdown on strays.

Critics say the dogs are held in “deplorable” cramped  pounds and are often killed inhumanely.

To TAKE ACTION, contact Dr. Andrej Butaru and urge him to ensure that these horrible stray animal camps are closed, and that those who abuse these animals are brought to justice.

Breaking! PepsiCo & Beyond Meat Partner To Launch ‘The PLANeT Partnership’...