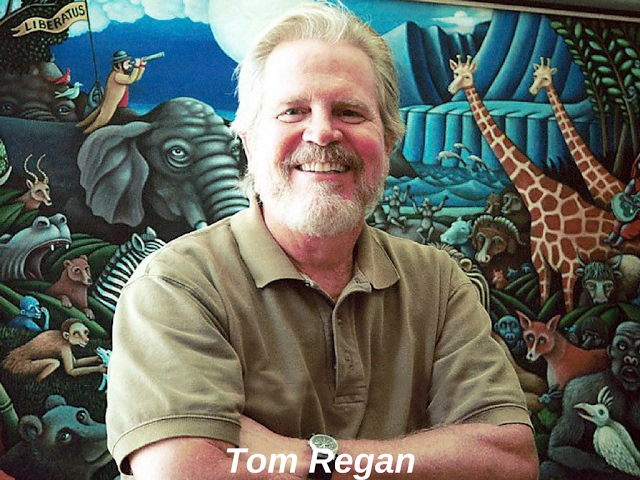 Revered philosopher, professor and an original founder of the animal rights movement, Tom Regan, passed away on Friday, February 17, 2017, succumbing to pneumonia.

“It is with great sorrow that LCA announces the passing of one of the founders of the animal rights movement, and an extraordinarily brave, compassionate man: Tom Regan,” eulogized Chris DeRose, Founder and President of Last Chance for Animals who referred to Regan as a ‘longtime good friend’. “You were a true hero for animals. The world will never forget you.”

The author of Pulitzer Prize-nominated books including The Case for Animal Rights, for which he was perhaps best known, Regan was at the forefront of the fight for animal rights.

“Tom was among the first academics to acknowledge that, just like humans, animals have certain inalienable rights that should not be taken away, under any circumstances, including for human experimentation,” continued DeRose. “While others made excuses for the horrors of vivisection, Tom demanded change.”

In memorandum, DeRose also reflected on when, in 1988 following the organizations historic break-in at UCLA’s brain research lab to expose horrific experiments on cats, Tom served as keynote speaker at Last Chance for Animals’ World Day for Lab Animals. Taking place on the University campus, it was there that Tom pontificated, what many believe to be “the most powerful animal rights speech ever given,” titled The Sword of Justice, the Torch of Reason.

Regan, who was an esteemed professor at Emeritus Of Philosophy at North Carolina State University before retiring in 2001, passed away at his home in North Carolina, according to family spokesperson Marion Cox Bolz.

May his incredible work on behalf of the voiceless live on, and may he forever rest in peace. God Bless!

All photos of these Asian elephants were taken at the Center for Elephant Conservation in Polk City, Florida, by Stephanie Rutan of White Oak...
Read more
Breaking News

Photo Credit: Wolf Patrol Since December, an alarming number of innocent animals have died by poisoning in northern Wisconsin counties. Authorities believe that someone is intentionally mixing...
Read more
News

Clear The Shelters: A Huge Success For Pets In Need Of Forever Homes

Animal shelters across the country came together on July 23 for second annual Clear the Shelters, a nationwide pet adoption event created to connect...
Read more
News

Photos From @CubanitoenCuba As Hurricane Irma continues its trail of devastation, animal advocates continue to prove that they are definitely an extraordinary breed. A most recent...
Read more
Load more