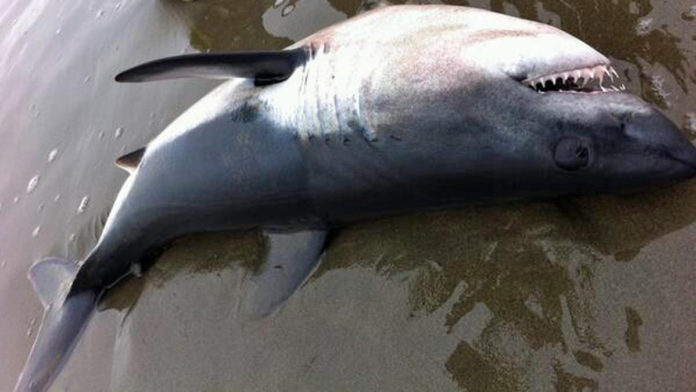 A devastating scene played out Friday evening when a great white shark, estimated to be approximately 10 feet long and withering in pain, washed ashore on a beach in Santa Cruz, California.

Sadly, according to the Daily Mail, the bloodied and battered “sharp-toothed fish was spotted writhing around in the shallow waters,” desperately trying to roll over on its back.

As reported by eyewitnesses, the distressed shark layed on its back with its mouth open, displaying razor-sharp teeth, as it struggled to breathe; all while beach-goers hovered around the poor animal taking photos on their phones. 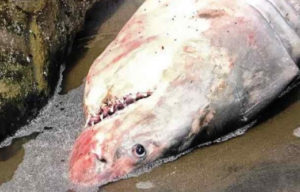 After animal experts unsuccessfully tried to help the shark return to deeper waters, as reported by the Daily Mail, its dead body was found later further down the shore.

In an interview with the Santa Cruz Sentinel, Sean Van Sommeran, the executive director of the Pelagic Research Shark Foundation, which tried to rescue the shark, said it was unclear what happened to the shark but that, undoubtedly, something was wrong with it.

“’The shark lost energy after hours spent flailing ashore and in shallow water. It was upside down as we tried to get it to deeper water,” Van Sommeran explained. “A healthy shark wouldn’t do that.” 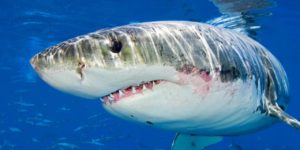 Vets are reportedly currently investigating the cause of death. The Daily Mail mentions suspicions that the shark was “blighted by a fishing hook or nervous system infection” while CNN reported that scientists did not know “whether the animal stranded itself or was sick.”

Whatever the case may be, the outcome is heartbreaking.

The California Department of Fish and Wildlife eventually transported the deceased shark to a lab for a necropsy.

More than 100 shark deaths have already occurred this year in California, according to Van Sommeran.

Information found on www.wildlife.ca.gov describes Great White Sharks, such as the one that rolled in with the tide in Santa Cruz, as one of the ocean’s primary predators. Further, it stated that Great White Sharks, which do not typically prey upon humans, “remain one of the least understood of the sea’s creatures, despite the enormous popular and scientific interest in them.”

WQAD Proving once again that they are not monkeying around when it comes to the rights of animals, outspoken animal advocates are responsible for the...
Read more
News

Yesterday, the Executive Board of the Hawaii Board of Agriculture approved a measure to ban wild animals, including tigers, lions, bears, primates, elephants and...
Read more
Load more