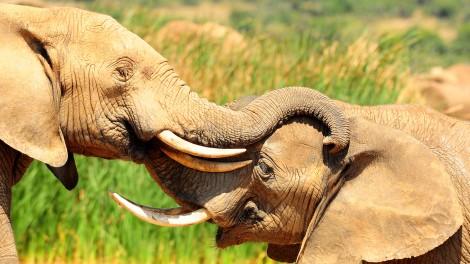 BEIJING, CHINA — The Chinese government today announced a one-year timeline for a ban on its domestic ivory markets, putting an end to the world’s largest market for poached elephant ivory in the world.

The Legal Ivory markets will be phased out by March 31st, 2017 and China’s legal commercial ivory ban will come into effect by December 31, 2017.

China has the largest ivory market in the world. An estimated 70% of the world’s Ivory trade ends up there and hundreds of thousands of elephants have been slaughtered as a result.

An estimated 415,000 African elephants remain today, compared with the 3 to 5 million in the early 20th century. Elephants are officially listed as a vulnerable species and could become extinct, if not for protection worldwide.

In 2015, Chinese President Xi Jinping committed to ban China’s domestic ivory market. China later committed to deliver a timeline for implementation of the ban by the end of 2016, resulting in today’s announcement.

“It’s a game changer and could be the pivotal turning point that brings elephants back from the brink of extinction. Now, other countries, including the UK, must follow China’s lead and close their ivory markets.

Over the past seven years, elephant populations in Africa have declined by a third, according to the Great Elephant Census.

Demand for elephant ivory has skyrocketed in recent years, leading to the poaching of approximately 35,000 elephants per year for their tusks. African savanna elephants have declined by 30 percent in the past seven years and if current poaching rates continue African forest elephants could be extinct in less than a decade.

The international commercial trade in ivory has been banned under the Convention on International Trade in Endangered Species (CITES) since 1989. China has maintained a “legal” ivory market under which the government supplies registered ivory carvers with raw ivory from government stockpiles. However, as in the U.S., UK, and other countries, the “legal” ivory market has led to a parallel illegal ivory trade, as it is extremely difficult to determine ivory age.

After China’s ivory market closes in Demember of 2017, the Chinese Ministry of Culture will help transition ivory businesses to find other jobs. The Chinese government will also increase enforcement and education to combat illegal ivory trade.

Italian luxury fashion house, Giorgio Armani Group, has just announced a ban on the use of angora wool beginning in the 2022-2023 autumn/winter season, adding angora to...
Read more
Breaking News

Yesterday, Dr. Jane Goodall joined with many of the world’s leading animal protection and conservation organizations to urge the 88 member countries of the International...
Read more
News

As the planet faces unprecedented challenges, EarthStream provides an essential new digital streaming world that includes powerful and impactful narratives that can change how...
Read more

Previous articleHeroes Rescue A Dog Stuck In A Frozen Lake
Next articleRIP Tilikum, You Are No Longer Captive

Dog Loves Getting Rides From His Buddy The Giant Tortoise

YOUR UBER IS HERE!!! This pup loves getting rides from his buddy the giant tortoise, who doesn't really seem to mind. Source: dp4k.m.
Read more
Breaking News

$26,000 Reward Offered For Information Resulting In The Conviction Of Those Responsible For The Fatal Poisoning Of Eight Gray Wolves In Oregon

Conservation and animal protection groups are offering a combined $26,000 reward for information leading to a conviction in the deliberate poisoning and killing of...
Read more
News

30-Year-Old Ark Animal Rescue & Retirement Home In The UK Ordered To Keep Their Dogs Quiet Or Else; Sign Petition To Help Them!

The Ark Animal Rescue and Retirement Home in North Somercotes, Lincolnshire, in the UK, has been served with a noise abatement order by East Lindsey...
Read more
Load more