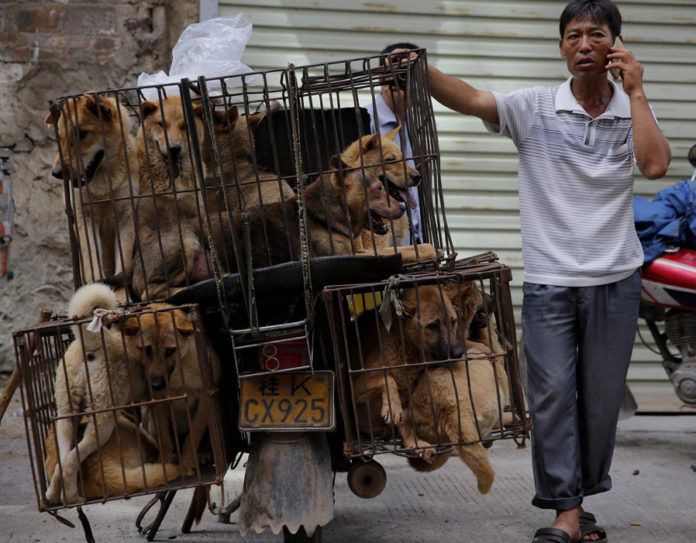 Breaking News. The slaughter of dogs in South Korea’s largest dog meat market have been banned on-site and will take place elsewhere. Dog meat will continue being sold in the Moran Market in South Korea while the slaughter will be hidden from the public.

An agreement between the city of Seongnam and the vendors’ association at Moran Market have been made. The dog slaughter facilities in the market will be removed as early as next week, the Korea Herald newspaper reports.
Seongnam’s Mayor, Lee Jae-Myung said that ending the slaughter of dogs in the dog meat market is about animal welfare and the reputation of both the city and South Korea as a whole. The mayor quoted Gandhi: “Seongnam City will take the initiative to transform South Korea’s image since ‘the greatness of a nation can be judged by the way its animals are treated.”

We don’t see any reason to believe him considering the slaughter will continue underground away from the public, and dog meat will continue to be sold in the market.

The Moran Market supplies one-third of all dog meat to South Korea which has thankfully been in a steady decline over the past couple of years, due to the rise in companion animals.

Tourists and locals were shocked by the torture and brutality at the Moron Market and have since called for it to end, officials have listened but the ban is far from over.

We must continue to fight to put an end to the dog & cat meat trade in Asia for good!

Previous articleFarmer John’s Slaughterhouse In Downtown LA
Next articleHeartbreaking News! Virunga Conservationists And Rangers Have Been Killed In The Congo

World Health Organization Indicates There Is A High Likelihood The Coronavirus Originated From The Consumption Of Bats As China Imposes A Temporary Ban On...

As the spread of the deadly Coronavirus is currently affecting much of mainland China leaving more than 420 people dead, Chinese authorities recently announced a nationwide...
Read more
Industry News

Breaking! Anger Mounts As Iceland Sets Quota For Commercial Whaling At 426 Whales Annually; This Must End!

Standing with 150 countries today for the Global March For Elephants & Rhinos in LA. We are joined by co-organizers Susan Campisi & Natalie Gonzalez,...
Read more
Load more