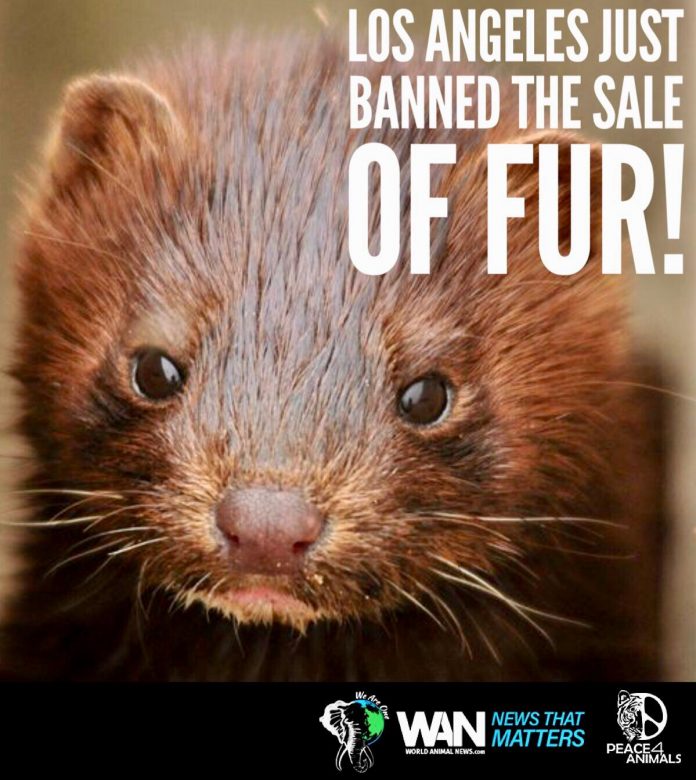 Breaking news from Los Angeles which will now become the largest city in the United States to ban the sale of fur, following a unanimous vote by the city council this morning.

The motion by Councilmember Bob Blumenfield, co-presented by Councilmember Paul Koretz and seconded by Councilmember Mitch O’Farrell, will prohibit the sale of products such as apparel and accessories made in whole or in part of fur; including coats, handbags, shoes, hats, and jewelry. The ban will take effect 24 months after final language is passed.

“Thanks to my colleague Councilmember Bob Blumenfield, Tony Kanal, Maggie Q, Joanna Krupa, and all the animal welfare advocates who joined us this morning to support a fur ban in LA,” Koretz posted on his Facebook page this morning after the meeting. The time to ban this arcane, barbaric practice is now!

“Los Angeles has taken an ethical and moral stand that cruelty to animals is not acceptable,” Marc Ching, founder and CEO of the Animal Hope and Wellness Foundation, which lobbied for the legislation following undercover investigations into the fur trade, said in a statement, “The fur ban is not just about creating an awareness about animal welfare, it is about creating a more humane community, about being in line with this city’s values.”

“It’s 2018 – there’s no excuse for being complicit in this inhumane and unnecessary trade. With this vote we are telling the world that Angelenos care about animal welfare,” stated Councilmember Bob Blumenfield. “Thanks to Councilmember Paul Koretz and Marc Ching from Animal Hope and Wellness Foundation for partnering in this effort and helping galvanize so many voices. We will continue to be a leader in animal welfare efforts and must work with other cities and states until this vile practice is ended across our nation.”

Breaking! $12,600 Reward Offered To Find The Hunter Responsible For Killing A Second Wolf In Oregon Within The Last 5 Weeks

A $12,600 reward is being offered for information that leads to the arrest and conviction of the person or persons responsible for the poaching of a...
Read more
News

Undercover investigations exposing the dark side of social media where innocent animals are often exploited and abused for human greed, selfishness, and profit are...
Read more
Load more