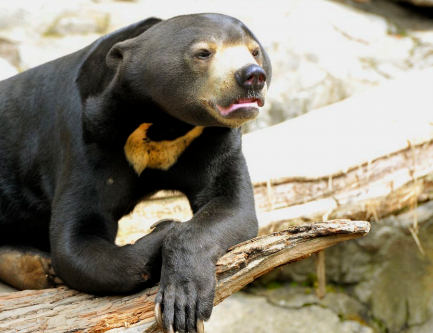 The illegal trade in bear parts for traditional medicine persists in Malaysia with a higher percentage of shops selling products claiming to contain some form of bear bile.

A study released recently by TRAFFIC recorded that bear-based medicines were available in 69% of Traditional Chinese Medicine (TCM) that was for sale in shops surveyed in Malaysia between 2017 and 2018. In 2012, 48% of shops surveyed offered similar products. 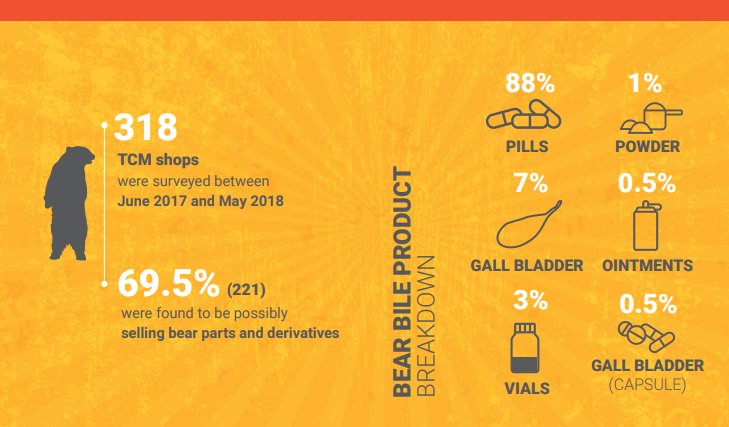 The Federal Territory of Kuala Lumpur and Selangor had the highest proportion of shops found with bear bile products, followed by Johor and Perak. Spot-checks at TCM shops by TRAFFIC in selected states in 2019 confirmed the widespread availability. The survey did not cover the East Malaysian states of Sabah and Sarawak.

As in previous surveys, bear bile pills were the most common product for sale, accounting for 88% of all items found. Gall bladders, powder, vials and ointment were among other bear parts sold to a much lesser extent.

While the pills were easily available, authenticity was unclear due to varied and inconsistent claims by retailers and labeling, or lack thereof. Only a fraction of the sellers claimed to have pure bear bile pills compared to the previous survey.

“While trade remains open, it has become less clear whether retailers are selling genuine bear bile products or simply trying to circumvent the law by claiming their bear bile products only contain herbs and other animal bile,” said Kanitha Krishnasamy, Director of TRAFFIC in Southeast Asia. 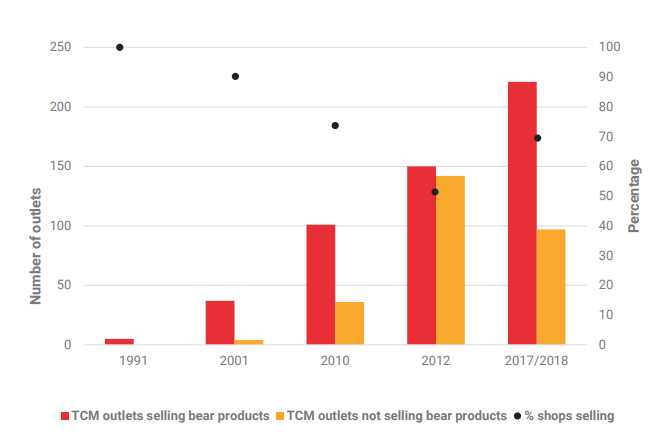 “If indeed a growing number of traders are passing off other ingredients – be it animal-based parts or not – as bear-bile medicine, this adds another worrying dimension to the problem and one that requires scrutiny by regulatory bodies. But regardless, this practice sustains the belief that bear-based medicine is effective and fuels the demand and illegal trade in bears,” said Krishnasamy.

The is no scientific evidence that bear-based medicine is effective or a cure for certain illnesses.

“Our Federation is committed to ensuring that business is conducted responsibly and legally, and towards this, we are working with TRAFFIC and the regulatory bodies to educate our members to be compliant with laws,” said Ting Ka Hua, President of the Malaysian Federation of Chinese Physicians and Medicine Dealers Association of Malaysia (FCPMDAM). 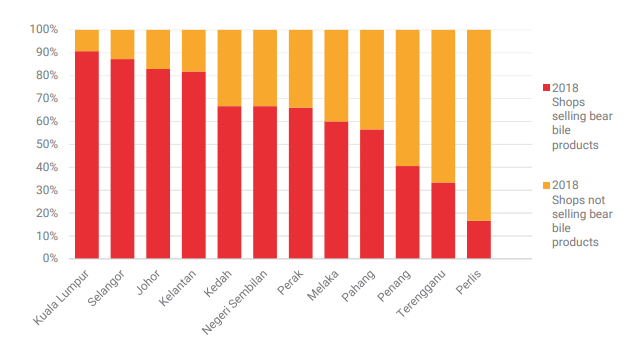 An Update on the Bear Bile Trade in Peninsular, Malaysia, comes weeks after the 2nd International Symposium on Sun Bear Conservation and Management concluded in Sabah, underpinned by the Global Conservation Action Plan for Sun Bears (2019-2028). Launched in June 2019, it is the world’s first-ever Action Plan for a terrestrial bear species, setting out an ambitious 10-year strategy to safeguard the world’s smallest bear species that continues to be poached for their parts.

The Action Plan was developed by hundreds of experts in collaboration with Free the Bears, IUCN SSC Bear Specialist Group, IUCN SSC Conservation Planning Specialist Group, and TRAFFIC. Initiated in 2017 at the 1st International Symposium on Sun Bear Conservation and Management, the Action Plan also identifies a wide range of partners, such as TCM practitioners, to come on board and support global efforts to safeguard the species.

A progress review of this Action Plan carried out at the 2nd International Symposium in September 2019, which showed that some actions were already underway, including trade related threats which TRAFFIC and their partners are working on in the region. Meanwhile, other issues, such as those concerning land use management and enforcement, were highlighted as gaps that required more urgent interventions.

Prior to the symposium, a smaller group of experts considered priority issues and actions for Sabah, which will be used to establish a state-wide plan for Sun Bear conservation and management.

Breaking News! COVERGIRL Is Now The Largest Makeup Brand To Become Cruelty-Free In The Global Fight To End Animal Testing For Cosmetics

Urgent! Fosters & Adopters Needed To Save 458 Pigs In Kentucky By September 14th; State Plans To Euthanize Any Remaining Animals After That Deadline

Photo from WKRC A woman who started an animal rescue in Pendleton County, Kentucky, became overwhelmed when the number of pot-bellied pigs in her care...
Read more
Breaking News