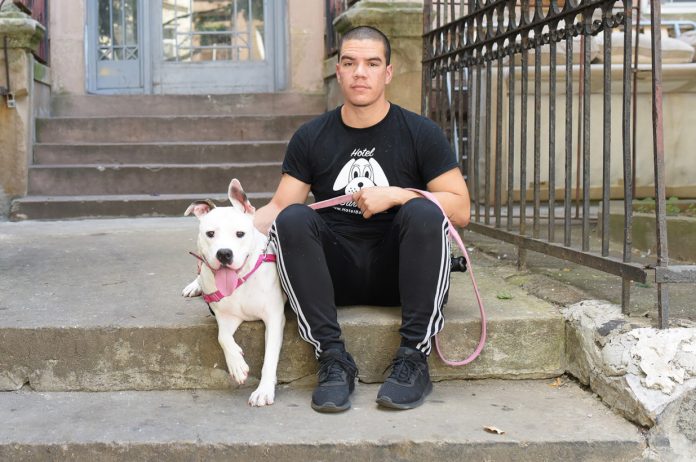 Kevin Tamayo’s pit bull, Tori, was locked inside his family’s apartment in Brooklyn for two days after they were evicted. Photo by Dennis A. Clark

Yesterday, New York Governor Andrew M. Cuomo signed legislation to protect pets from being abandoned during an eviction. The new law requires officers executing a warrant of eviction to check the property for pets and to coordinate the safe removal of such animals with the evictee.

“I know firsthand how pets quickly become members of your family and it is absurd that in these instances a living animal can be treated the same as a possession and be put in harm’s way,” Governor Cuomo said in a statement. “I’m proud to sign this measure that will protect beloved family pets and solve this issue once and for all.”

When an eviction order is executed, a marshal takes possession of the property located within the evictee’s premises, prepares a written inventory of all items inside, stores the items for a specified amount of time, and then allows the evicted tenant to later retrieve their items.

The current law does not distinguish between the treatment of a couch and an animal, which can result in the abandonment of pets. The law signed yesterday addresses this oversight to help ensure the safety and care of pets.

State Assemblywoman Linda Rosenthal sponsored the measure after a Brooklyn family was locked out of their apartment in September of last year. Unfathomably, their two-year-old pit bull rescue, Tori, was left behind in a crate and the evicted family was not allowed to enter the apartment to retrieve her.

Tori, who was left without food and water, was reunited with her family when a Judge issued a court order after an emotional two days.

“The No Pet Left Behind Law recognizes that pets should not be treated like property when their family is evicted, and it will ensure that plans are made for their care,” stated Assemblymember Rosenthal who called the passage of the legislation ‘common sense’ prior to it becoming law. Cats are not like couches, dogs are not like dining tables, and no family should go through what Tori and her family did when they were evicted.”