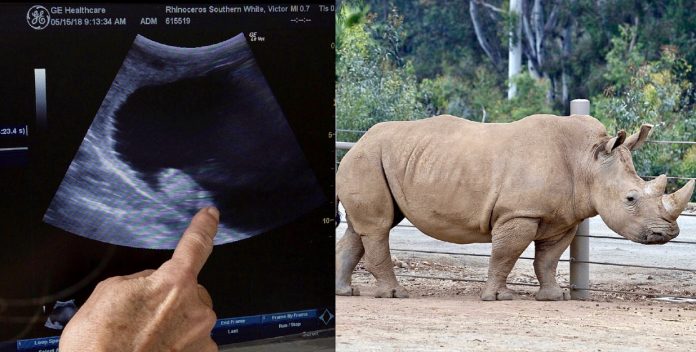 Success Marks Milestone in Major Efforts to Save the Critically Endangered Northern White Rhino from Extinction!

“The confirmation of this pregnancy through artificial insemination represents an historic event for our organization but also a critical step in our effort to save the northern white rhino,” said Barbara Durrant, Ph.D., director of Reproductive Sciences, San Diego Zoo Institute for Conservation Research. “The sperm had excellent motility and the procedure went very well.

We are excited to confirm that the pregnancy has occurred, but we have a long time before we can declare a real success with the birth of a healthy southern white rhino baby.” Rhino gestation lasts from 16-18 months and the artificial insemination of Victoria occurred on March 22nd.

This could be the solution to bring Sudan’s species back from certain extinction in the wild.

Victoria is one of six female southern white rhinos that were relocated to the Safari Park from private reserves in South Africa in November 2015.  Artificial insemination of rhinos has rarely been attempted and there have only been a few births from this procedure in the past.

“Just the fact that we have been able to confirm this pregnancy while the embryo is just a few weeks old is tremendously important and is all due to the work that animal care staff have put into developing relationships with these rhinos,” said Parker Pennington, post doctoral associate. “Through regular cooperative ultrasounds with Victoria, we will be gathering a lot of data about the progress of a rhino pregnancy – data that has never been gathered before.”

If Victoria is able to carry the calf to term, the first southern white rhino calf born at the Nikita Kahn Rhino Rescue Center could arrive in summer 2019.

To reach the ultimate goal of successfully producing a northern white rhino, multiple steps must be accomplished. One of the first steps involved sequencing the genome of the northern white rhino to clarify the extent of genetic divergence from its closest relative, the southern white rhino. Another step requires conversion of cells preserved from 12 individual northern white rhinos in the San Diego Zoo Institute for Conservation Research’s Frozen Zoo® to stem cells that could develop into sperm and eggs—a process successfully begun in the laboratory of Jeanne Loring, Ph.D., of The Scripps Research Institute, with details of the process published in 2011.

Reproductive options include artificial insemination, in vitro fertilization and embryo transfer, with the southern white rhinos possibly serving as surrogates for northern white rhino embryos. The reproductive system of rhinos is very complex, and there is still much to be learned. There are many challenges ahead, but researchers are optimistic that a northern white rhino calf could be born from these processes within 10 to 15 years. This work also may be applied to other rhino species, including critically endangered Sumatran and Javan rhinos.

We hope that one day soon, we will be able to save the last of Sudan’s species from extinction and protect the remainder of the endangered species we have left on the planet.

Please Note* WAN & Peace 4 Animals does not support captivity, but does support any efforts to save endangered species from extinction in the wild!

Breaking! Severely Entangled Seal Covered In 77 Pounds Of Trash & Nets Is A Grim Reminder Of Why We Must Help Clean Up Marine...

In what is being called one of the worst cases of marine life entanglement in the world, a deceased male grey seal washed up...
Read more
Industry News

Breaking! The EU Is The Largest Market For Kangaroo Meat and Skins; Citizens Are Now Calling For A Ban On Imports

Every year, an average of 1.6 million kangaroos are killed for commercial purposes in Australia, making it one of the biggest commercial hunts in...
Read more
Breaking News

The Horseracing Integrity And Safety Act Passes The U.S. House Of Representatives; Now Moves To The Senate For Vote