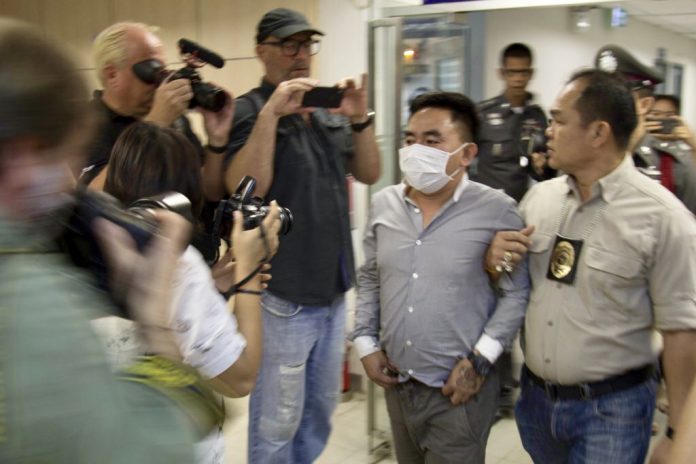 BANGKOK – January 20, 2018 – Acting on fresh evidence, Thai Police yesterday tracked down and arrested wildlife trafficking kingpin Boonchai Bach in Nakorn Panom, Thailand, next to the Mekong River. He is being held in connection to the illicit trafficking of 14 rhino horns from Africa into Thailand in early December 2017, and is suspected of supervising an extensive syndicate responsible for trafficking large quantities of poached elephant ivory, rhino horn, pangolins, tigers, lions, and other rare and endangered species for more than a decade.

Boonchai Bach is of Vietnamese origin, but also holds Thai citizenship. He is a leading member of the Bach family that has long run the international supply chain of illicit wildlife from Asia and Africa to major dealers in Laos, Vietnam and China, including to the notorious Vixay Keosavang. Keosavang, based in Laos, was named Southeast Asia’s biggest wildlife dealer in the New York Times in 2013. Three years later, the Bachs were featured as Keosavang’s main supplier and referred to as Asia’s “top wildlife crime family” in a Guardian newspaper series. Both expose’s relied heavily on research provided by the counter-trafficking organization Freeland, which described the collective network of the Bachs, Keosavang and other business partners as one syndicate called “Hydra”.

The discovery of Hydra and law enforcement’s pursuit of its members has taken part in stages, and is set to go through more. Between 2010 and 2013, Freeland and law enforcement authorities identified Vixay Keosavang as Southeast Asia’s most significant wildlife dealer, but his arrest was not possible due to his secure position at his base in Laos. With the blessing of the law enforcement community, Freeland –in order to disrupt Keosavang’s destructive business–, helped expose Keosavang’s “Xaysavang Trading Company” in a March 4th, 2013 New York Times investigative feature story.

At that time, it was revealed that convicted Thai citizen Chumlong Lemthongtai had supplied Vixay Keosavang with large amounts of rhino horn from South Africa, using Thai commercial sex workers to sign fraudulent hunting and export documents. Lemthongtai had been arrested by South African authorities in 2012 after information was shared among the South African Revenue Service, Freeland, and the Thailand’s Department of Special Investigations.

The US State Department followed suit in mid 2013 with a $1 million reward offer for information leading to the dismantlement of the Xaysavang Trading Company network.

After further research, in 2014, Freeland and Thai investigators discovered that Keosavang’s supply chain was actually organized and run by the Bach family. The Bach family had representatives in Africa, Thailand, Laos, and Vietnam. It was discovered that Lemthongtai was one of those representatives. He had been hired by the Bachs who were coordinating with Vixay Keosavang to order dozens of rhinos at a time to be killed for their horns, and to then transport them via Thailand to Laos for onward sale to Vietnam and China. Other suppliers and buyers were discovered too that were working together inside the wider syndicate, thereafter referred to as Hydra.

Between 2014-2016, Freeland and Thai authorities constructed an increasingly rich analysis of Hydra, focusing on the heart of its logistics: the Bach family. The analysis helped pinpoint multiple individuals and subsidiaries in the Hydra. Bach Van Lim was an original leader. But starting in 2005 he started to share power with his younger brother, Boonchai who was posted in Nakorn Panom, where the syndicate staked out a headquarters, bought significant property, and arranged regular smuggling of contraband across the adjacent Mekong River. Once in Laos, the cargo would be moved for onward transport along the supply chain extending into Vietnam and China.

The Hydra case was accelerated after new analytical technology was recently introduced. The link chart analytical tool IBM’s i-2 and a Cellebrite digital forensics kit were used to help police associate suspects with people already arrested.

Based on Freeland’s background information, a law enforcement action against the Bachs was originally planned by Thai authorities in September 2016 just prior to the UN Convention on International Trade in Endangered Species (CITES) 17th Conference of the parties in Johannesburg, where more than 175 countries had gathered to debate the trade in rhino horn and ivory. However, the enforcement action never happened due to the illusive nature of the Bachs. Authorities blessed the release of some of Freeland’s information to the Guardian newspaper, which ran a front-page story on Hydra and the Bachs during the September 2016 CITES meeting, capturing world attention.

Then in early December 2017, Thai Customs ran a routine check of cargo on a flight from Ethiopia, which according to the passenger manifest had Vietnamese and Chinese citizens originating from South Africa, and was therefore deemed suspicious. X-ray inspection of one of their suitcases in cargo revealed rhino horns being concealed. Customs and police followed the suitcase to a Thai government office in Suvarnabhumi Airport and discovered and arrested an officer there, Nikorn Wongprajan. Nikorn had been known to Freeland and DSI as a member of Hydra for a while, but he too had proven illusive. Nikorn admitted to being hired to pass the horn from the airport to one Bach Van Hoa, a relative of Boonchai, at a nearby apartment. Police followed Nikorn to Bach Van Hoa and a Chinese citizen who were waiting at the apartment, and arrested them. The 3 are currently in Thai prison.

Last week, Thai police requested a further briefing from Freeland on Hydra and the Bach family, and then moved on to identify fresh evidence. Acting on the evidence, police issued an arrest warrant for Boonchai who was immediately captured in Nakorn Panom.

“The security officers of Suvarnabhumi Airport, Suvarnabhumi Airport Police Station, Thai Customs and Immigration Police at Nakhon Panom are to be congratulated for breaking open the country’s largest wildlife crime case, ever,” said Steven Galster, Founder of Freeland who has been following Hydra since 2003. “This arrest spells hope for wildlife. We hope Thailand, its neighboring countries, and counterparts in Africa will build on this arrest and tear Hydra completely apart.”

Previous articleSignatures Needed To Demand Justice & Maximum Sentence For Man Who Left More Than 100 Animals Out In The Freezing Cold!
Next articleTwo White Tigers And Two Bears Rescued Thursday In Texas From Owners Housing Them Illegally

California students who want their schools to engage in modern, state-of-the-art scientific practices, have more work to do today as AB 1586, a bill to...
Read more
Breaking News

An undercover investigation of Marineland Canada and subsequent legal complaint by Last Chance For Animals (LCA) have resulted in the Ontario Police Department investigating the entertainment park’s use...
Read more
News