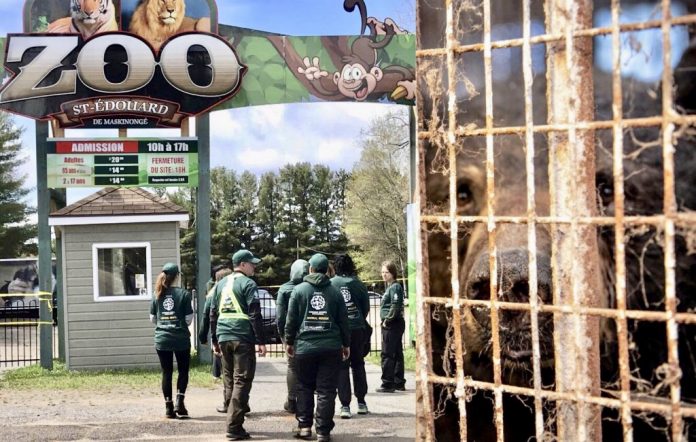 Humane Society International/Canada, Friends of HSI, and HSI global — with the generous support of the Eric S. Margolis Family Foundation — are working alongside the Montreal SPCA in the seizure of animals from a roadside zoo in St-Édouard-de-Maskinongé, Quebec. The owner of the unaccredited facility, Zoo de St-Edouard, has been arrested and charged with neglect and cruelty to animals under the Canadian Criminal Code. If convicted, the accused could face a five-year prison sentence and a lifetime ban on having custody or control of any animal.

Experts from HSI’s Canadian and global affiliates will provide specialized care for more than 100 wild and exotic animals comprised of dozens of different species, as well as, transport of all wild animals to a network of partner sanctuaries throughout North America. A number of the animals are listed on Appendix I of the Convention on International Trade in Endangered Species of Wild Fauna and Flora (CITES).

“We are pleased to play a critical role in getting these deserving animals to safety, with the incredible support of the Eric S. Margolis Family Foundation. It was disturbing to see this facility. Many of the animals were confined in dark, barren, dilapidated enclosures. Others were living with entirely inadequate shelter with minimal protection from the elements. Some of the animals did not even appear to have access to water or proper food and appeared to be suffering from a variety of medical conditions,” said Rebecca Aldworth, Executive Director of HSI/Canada in a statement. “Some of the animals were showing signs of significant psychological distress, including compulsive behavior and constant pacing. Notably, dead and ill animals have been removed or seized from this property in recent months. This case underscores the importance of strong animal welfare provisions in Canada’s Criminal Code, particularly as they apply to situations of gross neglect.”

Eric Margolis, Founder of the Eric S. Margolis Family Foundation, said, “Our foundation supports organizations that provide care for abused, neglected and abandoned animals, both wild and domesticated. We will always support the work of organizations like HSI/Canada and Friends of HSI, who defend those who cannot defend themselves.”

HSI/Canada has campaigned for over a decade to achieve meaningful improvements to the animal welfare provisions in Canada’s Criminal Code. One of the primary deficiencies in the Criminal Code is the need for enforcement authorities to prove willfulness on the part of neglectful owners before they are able to lay criminal charges and seize animals. This results in prolonged suffering and can prevent appropriate application of the Criminal Code in situations of neglect.

Breaking! A Lawsuit Filed Today Aims To Save An Estimated 300 Leopards Each Year From Being Imported Into The United States By Hunters As...

WildEarth Guardians Wins Lawsuit Against USDA’s Wildlife Services To Stop The Use Of Cruel Traps, Poisons & Snares On Wildlife In New Mexico

In a victory for wildlife in New Mexico, WildEarth Guardians settled its lawsuit against USDA’s Wildlife Services after the federal program agreed to stop its...
Read more
News

WAN Update On The Male Mountain Lion Found Yesterday In Brentwood, California, That Was Safely Relocated Back Into The Wild

A young male mountain lion that was found wandering the streets of Brentwood, California, yesterday, taking residents of the busy city by surprise, has...
Read more
Load more