Taepyeong, the largest dog slaughterhouse in South Korea has been shut down by local authorities, bringing the country one step closer to ending its brutal dog meat trade.

As per Humane Society International (HSI), Seongnam city council intends to build a community park on the land, creating a vibrant public space where once hundreds of thousands of dogs were slaughtered for human consumption.

Sadly, as per an update on the Korea Animal Rights Advocates Facebook page yesterday, a delay by Seongnam-si resulted in the slaughterhouse owner having time to transfer the dogs to another location.

Taepyeong is comprised of six individual slaughterhouses, five of which will be bulldozed immediately. Permission to destroy the sixth building was not secured in time for the closure, however, all of its cages will be destroyed and equipment removed so that it is no longer operational. 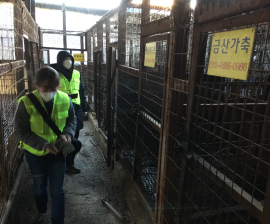 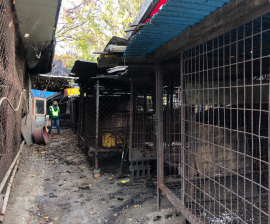 “Both as a Korean citizen and an animal campaigner, it was incredibly moving for me to be a part of the historic closure of this notorious dog slaughterhouse,” stated HSI Korea’s Nara Kim in a statement. ” This really feels like a landmark moment in the demise of the dog meat industry in South Korea, and sends the clear message that the dog meat industry is increasingly unwelcome in Korean society.”

The closure of Taepyeong comes at a time when dog meat consumption is declining rapidly in South Korea, particularly among younger generations. A survey by Gallup Korea conducted in June 2018 claims that 70% of South Koreans state that they will not eat dog meat in the future, and recent moves to curb the dog meat trade reflect a society increasingly ill at ease with the industry. Most recently, last September, a Supreme Court struck down a lower court decision to allow dog electrocution.

“We have been making constant efforts to shut down the Taepyeong-dong dog slaughterhouse through investigations and putting pressure on Gyeonggi province and Seongnam-si. As Korea’s biggest, brutal, illegal dog slaughterhouse, Taepyeong-dong is notorious for supplying huge amounts of dog bodies to nearby Seongnam Moran traditional market. Its closure is a historical event, and hopefully may trigger the closure of other illegal dog slaughterhouses throughout the country,” said Hyunji Kim of Korea Animal Rights Advocates. “Until we achieve this, we really appreciate the support of both Korean people and global citizens who love animals for helping our campaigns to completely end dog meat in Korea.”

Korea Animal Rights Advocates recently teamed up with HSI International to present a petition of nearly one million signatures to the President’s Blue House, calling for an END to the dog meat trade!

There is no more dedicated mother than the mother bear. Her babies are born in the dead of winter and weigh only one pound....
Read more
News

Petition To University Of Alberta: Save Andy the Polar Bear

A polar bear named Andy is in trouble, and he needs our help. When he was not yet full-grown, Andy was fitted with a...
Read more
Load more