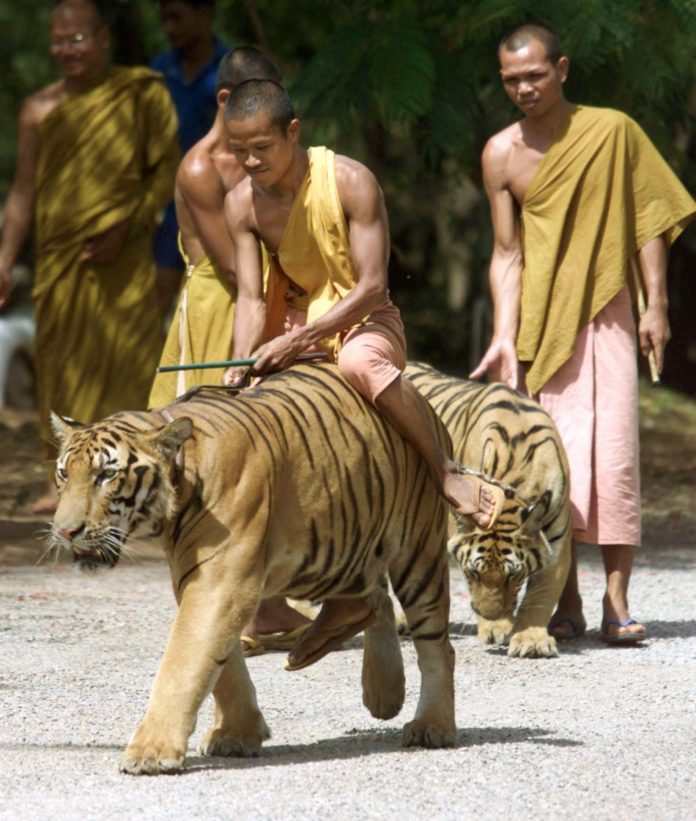 How Can The Tiger Temple Plan To Reopen 9 Months After It Was Raided?

Tiger Temple plans to reopen amidst outrage and a raid that took place 9 months ago, in which dozens of dead baby tigers, some unborn, where found among hundreds of tiger parts. The owners of the infamous Tiger Temple were selling the baby cubs and parts on the black market for asian medicine, for their pelts, claws used to make magic amulets and tiger-based energy drinks.

Tiger Temple after the raid was somehow able to obtain a zoo permit and sadly new tigers. The people behind the Tiger Temple plan to reopen to the public in March 2017.

This is only nine months after officials raided and shut down the Tiger Temple. A new zoo is set to open nearby under a different name. A criminal case against the owners of the temple on trafficking has not seen light, many think because of corruption and police interference.

All for profit: Tourists can sadly pay to interact with over one hundred tigers when it opens in March 2017. They are apparently all tigers that will be transferred from another zoo in the Nakhon Nayok province of Thialand.

Although the Tiger Temple and the upcoming zoo are separate entities, the link between the two is obvious. A legal rep for the controversial temple announced in April 2016 that it was seeking permission to open a zoo under the name Tiger Temple Co., which would be run by people appointed by the infamous Tiger Temple.

Abbot Phra Wisutthisarathen, known locally as Luang Ta Chan, and his associates were charged with illegally selling and possessing endangered, protected tigers. They have repeatedly denied the allegations and have remained free while the case has stalled.

A report from National Geographic suggests that those behind the Tiger Temple’s offshoot zoo operation are distancing themselves from the scandals; the zoo company earlier this month changed its name from Tiger Temple Co. Ltd. to Golden Tiger (Thailand) Co. Ltd.

All of the tigers from the raid last year will not be able to be released back into the wild. They are currently at breeding facilities and will sadly live the rest of their lives in captivity as a slave to money and greed.

You Can Help By Not Purchasing A Ticket To See These Animals In Captivity.

They Were Born Free, Let Them Live Free!

A stunning albino deer captured on camera in the wild! Native Americans believed the occurrence of a white animal was a huge sign of prophecy...
Read more
News

The Atlantis Resort is still in the permitting process to bring in 40+ new captive dolphins, to their new Koolina Resort on the Hawaiian...
Read more
Load more