March 1st is National Pig Day and Jameson Rescue Ranch in Napa Valley, California, is acknowledging the occasion by sharing the heartwarming story of Lucy, a Red Wattle pig that was recently rescued and placed in a wonderful new home at Farmed Animal Sanctuary, Animal Place. It was there that she found love with, her pen-mate, Bert. 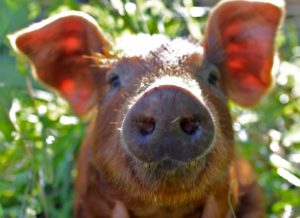 Lucy was only one-week-old, and near death, when she was found in a field and taken in by the no-kill rescue and sanctuary for companion and farmed animals in need, which searched for a new home for the piglet.

Grass Valley, California based Animal Place contacted JARR after finding out about her from a Facebook post and immediately offered Lucy, who was being fostered by Erica Rushing from Flatbroke Farms, a permanent home, as well as the opportunity to bond with one of their male pigs, Bert.

The once reclusive Bert quickly fell in love with Lucy and they now spend their days together rooting around, playing ball, eating and most importantly, snuggling.

National Pig Day was created in 1972 by sisters Ellen Stanley and Mary Lynne Rave with the purpose of according “the pig its rightful, though generally unrecognized, place as one of man’s most intellectual and domesticated animals”. 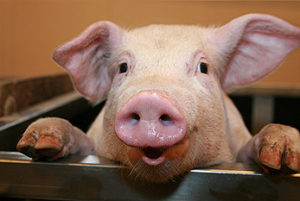 It is also a day, to reflect and pay heed to the clever, intelligent, and playful creatures, who feel pain and fear, and those who are not as fortunate as Lucy.

According to JARR, an overwhelming number of pigs suffer greatly from inhumane treatment ultimately resulting in their deaths; 68 million pigs on factory farms and an additional 115 million pigs are killed for food each year in the U.S alone. According to their calculations, approximately 1,000 pigs are killed every hour in any given slaughterhouse. 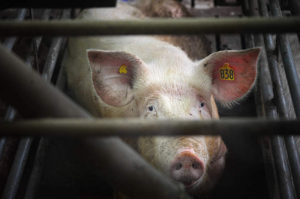 JARR provides transitional and permanent shelter, adoption and rescue services, humane education, animal advocacy, and is committed to ending animal hunger, cruelty and overpopulation. The non-profit also collaborates with and acts as a liaison for various local animal rescue groups.

WATCH: Amazing Bond Between Harry The Koala And His Caretaker Goes Viral

Harry, a baby koala from The Symbio Wildlife Park in New South Wales has fallen in love with his caretaker Tami Wilson, after a video of them playing together...
Read more
News

Last week, the Center for Biological Diversity filed a lawsuit to force the Trump administration to release emails related to the development of a new, highly controversial...
Read more
News