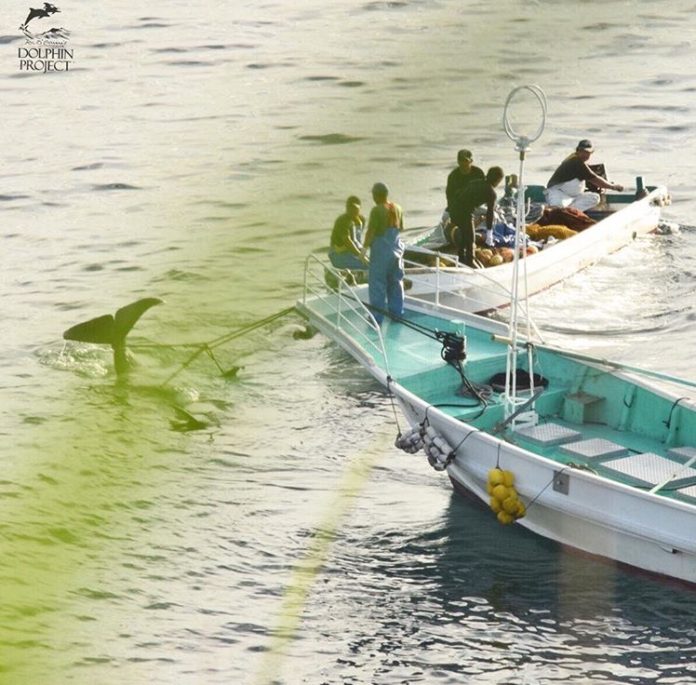 Day Four – September 19, 2016, Taiji, Japan: After 47 hours and  four days of being stolen from the wild and forcibly confined without food or shelter. The remaining pilot whales met a tragic end at the hands of Japanese fishermen. From the presumed matriarch, to the many juveniles, to the large male who was spotted many times bobbing his head out of the water, no lives were spared today.

At around 5:30 a.m. three skiffs and one banger boat left the harbor, making their way towards the pilot whales. Our worst fears were confirmed as the killing process started immediately.

After tightly tying the nets, six divers, along with fishermen, began pushing the pod of weakened dolphins underneath the gray tarps. Some of the adult pilot whales were so large, their frantic splashing and tail slapping could be heard for several minutes, echoing throughout the killing cove. It was – chilling.

In the absence of visuals, Dolphin Project Cove Monitors continued to live stream, documenting the sounds until all became quiet.

About 25 minutes later, one skiff left the cove, tarps attached to both sides to meet with the banger boat at sea. One dead pilot whale –likely the one we were listening to as it fought for its life – was wrapped by its tail, its large body being pushed all the way back to the harbor. It was one of the most horrific sights I have ever witnessed.” – Daniela Moreno, Dolphin Project Cove Monitor.

Each valiant struggle by the pilot whales and their subsequent demise took about 30-40 minutes. And in each instance, just like the first, the dolphins were tied by their tails as they were taken to the butchers.

Just before 9:00 a.m., the water started to churn again as the dolphins splashed non-stop, their panicked vocalizations continuing on and on. With each cry, I too started crying.” ~ Daniela Moreno said.

Twenty minutes later, a skiff left the cove with many tarps on top of it. The juveniles – and there were many in the pod – were piled underneath.

The Cove Monitors waited for another two hours, and just after 11:00 a.m., fishermen returned to the cove, and began removing the tarps. The nets were pulled. The killing was done.

By the time the announcement was made the dolphin meat was available in Taiji, a total of nine adult pilot whales and about seven juveniles, 16 dolphins in total, had lost their lives. They suffered greatly during their prolonged confinement.

These past four days have clearly illuminated the cruel slaughtering process that takes place in Taiji, with fishermen uncaring of the suffering of these sentient mammals. And, on a larger scale, the direct link to the captivity industry, with dolphins being sourced, then sold to aquariums and marine parks across the world.

It is a necessity to STOP the sale of tickets to dolphin shows, including swim-with programs.

Petition To University Of Alberta: Save Andy the Polar Bear

A polar bear named Andy is in trouble, and he needs our help. When he was not yet full-grown, Andy was fitted with a...
Read more
News

Why Wild Animals Belong In The Wild

This footage was taken from the MGM Las Vegas in 2012, but the footage has resurfaced as it continues to happen around the world....
Read more
News