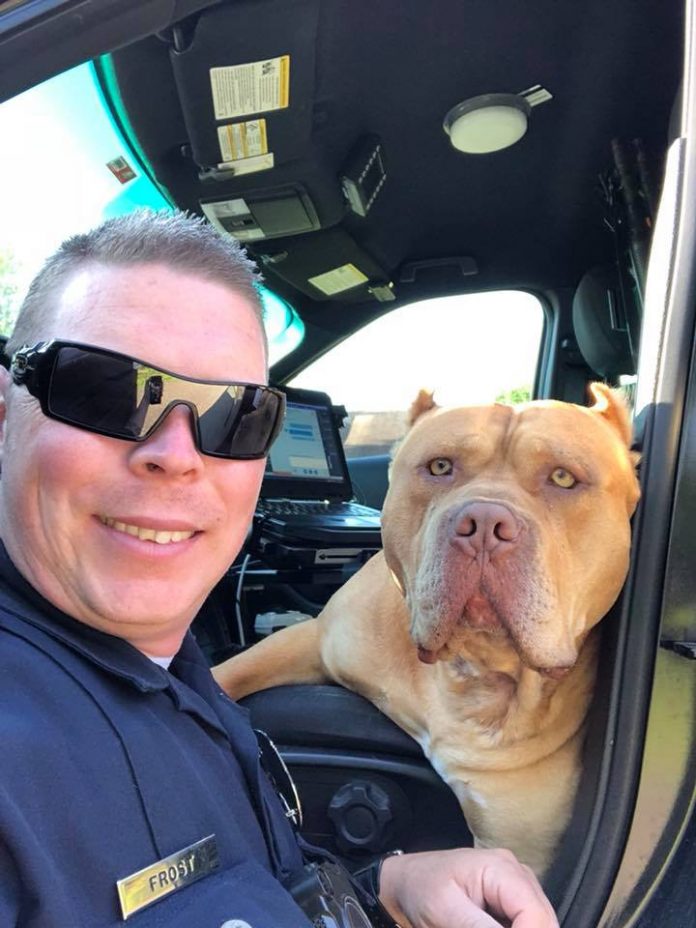 This morning, WAN learned about another beautiful story involving an officer and an animal.

“GREAT NEWS!!! We just learned that Gold, the dog we encountered yesterday, was picked up this morning by his owner at the Animal Care & Adoption Center, Texarkana, USA,” Texarkana Texas Police Department posted on its Facebook page, explaining that the “vicious” dog they had been called to apprehend had an implanted chip, but the owner’s contact information had not been updated in the system. “Had that information been current, it would have been possible for the Animal Control officer to immediately scan the chip and contact the owner yesterday. That would have saved Gold a trip to the Shelter and overnight accommodations there.”

“If you have a chip for your dog but are not sure that the information on file is still current,” continued the post, “please take a moment to call the company today to update.”

Officer Travis Frost responded to the scene, located the so-called threatening dog, and confronted the alleged suspect with a whistle. The dog, believed to be a pit bull but later identified as an American Bully, proceeded to greet the officer with a wagging tail.

According to the post, after Travis petted the dog, Gold went right up to the door of the patrol unit, which was left open in case the officer had to quickly escape from an attack by the dog, jumped in the front seat, and made himself at home. 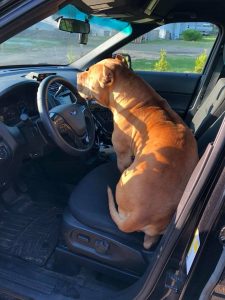 “Travis said they just hung out together and took some pictures until an Animal Control Officer got there,” the sweet post continued noting that “Pit Bulls have a bit of a bad reputation.”

“It is true that the American Bully was a product of crossing other dog breeds with the American Pit Bull Terrier, but is clear to anyone who takes the time to compare the traits and temperament of the Bully and Pit Bull that the two are now different breeds in spite of their common origins.”

That said, it is still unfair to label pit bulls as vicious because it depends on the owner, not the dog. The majority of pit bulls, who are raised with compassion and respect, are as friendly and lovable as any other breed; more so in some cases.

“While you should always be careful around any dog that you don’t know, you shouldn’t automatically assume that all pit bulls are bad dogs,” stated Travis who apologized for mistaking Gold’s breed. “They might be really loving like this guy was.”

Today’s takeaways, make sure your dog’s chip is updated with your most current information, and as a spokesperson for the police department told the Texarkana Gazette, “You shouldn’t judge a book by its cover.”

Previous articleSign Petition To Ensure The Man Who Starved His Elephant In Cambodia Is Held Accountable For The Animal’s Cruel & Unneccessary Death!
Next article100% Foster-Based “Home For Good Dog Rescue” Is WAN’s Rescue Of The Week!

The Beloved Puffin Is Now Classified As Globally Endangered

One of Britain’s most treasured birds, the puffin, has been classified as globally endangered. After suffering a severe decline in population in recent years, experts...
Read more
Breaking News

The Biden Administration announced yesterday its intent to prepare a programmatic environmental analysis of the impacts of decommissioning oil and gas drilling platforms, pipelines, and...
Read more
News