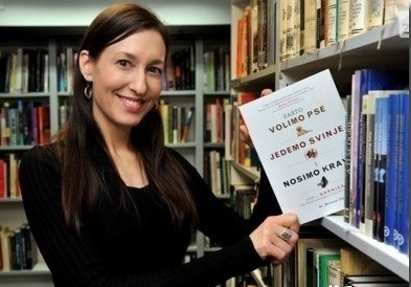 During our talk with Dr. Melanie Joy, we found out that she began her organization Beyond Carnism in order to raise awareness for all animals who are used for their meat.

Carnism is the invisible belief system, or ideology, that conditions people to eat animals. Carnism is essentially the opposite of veganism, as “carn” refers to “flesh” or “of the flesh”, and “ism” refers to a belief system.

Melanie Joy, Ph.D., Ed.M., is a Harvard-educated psychologist, celebrated speaker, organizational consultant, and author of the award-winning book Why We Love Dogs, Eat Pigs, and Wear Cows. Dr. Joy is the eighth recipient of the Institute of Jainology’s Ahimsa Award, which was previously awarded to Nelson Mandela and the Dalai Lama. Her work has been featured by numerous national and international media outlets, including the BBC, ABC Australia, NPR, and the New York Times.

Dr. Joy founded Beyond Carnism as animal agriculture is responsible for the unnecessary slaughter of 77 billion land animals worldwide per year, and is a major contributor to environmental degradation and human rights violations. Unfortunately, the majority of people who eat animals are unaware that they are contributing to such destruction.

Beyond Carnism believes that people need and deserve to know the truth about carnism, so that they can make their food choices freely. Without awareness, there is no free choice.

Because carnism is invisible, people rarely realize that eating animals is a choice, rather than a given. In meat-eating cultures around the world, people typically don’t think about why they eat certain animals but not others, or why they eat any animals at all. But when eating animals is not a necessity, which is the case for many people in the world today, then it is a choice – and choices always stem from beliefs.

As long as we remain unaware of how carnism impacts us, we will be unable to make our food choices freely – because without awareness, there is no free choice.

Why has carnism not been named until now? One reason is that it is simply easier to recognize those belief systems that fall outside the mainstream (e.g., vegetarianism or veganism).

A much more important reason, though, is that carnism is a dominant belief system: It is so widespread that its principles and practices are considered common sense, or “the way things are,” rather than a set of widely held opinions. Carnistic bias is built into the very foundations of society – when we study nutrition, for example, we actually study carnistic nutrition.

Carnism is also a violent belief system: It is organized around intensive, extensive, and unnecessary violence toward animals. Even the production of so-called humane (or bio) meat, eggs, and dairy – a tiny percentage of the animal foods produced in the world today – exploits animals and involves brutality.

In short, carnism is a system of oppression. It is enabled by an unjust exercise of power that causes unnecessary harm to billions of individuals.

Breaking! 102 Dogs Rescued From Unauthorized Encampment In England; Puppies Believed To Be Bred On Site

More than 100 dogs were rescued from appalling conditions during a raid yesterday in South Cambridgeshire, England. While some of the 102 dogs are suspected...
Read more
News

Stand With Anita Krajnc Co-founder Of Toronto Pig Save!

Anita Krajnc co-founder of Toronto Pig Save has been charged with criminal mischief & interference of property, because she gave water to pigs on...
Read more
Load more