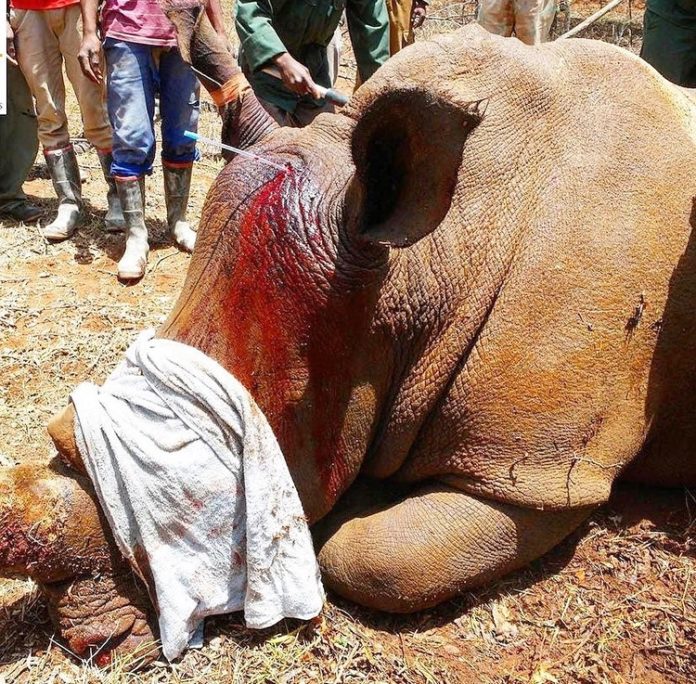 Our friend, Dr. Johan Marais was called to treat this very large, female adult White rhino, that had been shot in the head by poachers in Africa.

The attending vet, Dr. Me-lani Kuhler, monitored her while a team from Saving The Survivors took X-rays that revealed that the bullet thankfully missed the rhino’s vital structures.

The wound was cleaned and treated by the STS team and the female white rhino was then woken up by Me-lani.

The White rhino lifted herself up without any issues and trotted off to find her 8-month-old calf.

Incredible teamwork by Saving The Survivors, who jumped into action to save this beautiful endangered rhino and her calf.

“Saving The Survivors” – Creating Hope from Hurt – An ERP initiatve.

WANTED!!! The Killers Of This Female Rhino, Her Calf & Unborn Baby In Pilanesberg

The madness, will it ever end? Here is another innocent heartbreaking victim of the current poaching crises from Pilanesberg. This is the second pregnant cow in...
Read more
News

USFWS: Do Not Delist Yellowstone Grizzly Bears From The Endangered Species List

The US Fish and Wildlife Service has proposed removing grizzly bears from protection under the Endangered Species Act. Threats to grizzlies will significantly increase after...
Read more
Breaking News

Animal welfare groups from around the world, as well as those fighting on the ground to save Zimbabwe's last elephants, are outraged by the...
Read more
Load more