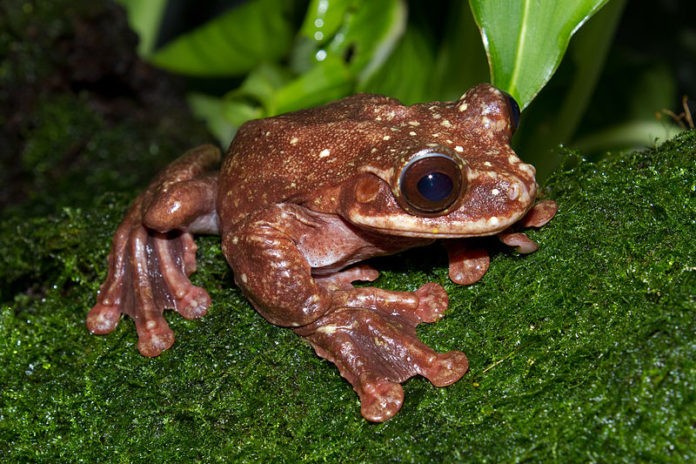 Extinction is Forever. “Toughie, the world’s last Rabbs’ fringe-limbed treefrog, has passed away. The very last of his kind, this means the species is now extinct.

The Rabbs’ fringe-limbed treefrog, was a species of frogs in the family Hylidae. They are relatively large frogs inhabiting the forest canopies of central Panama. They are capable of gliding by spreading their enormous and fully webbed hands and feet during descent.

The males of the species are highly territorial, guarding water-filled tree holes used for breeding. They are also the ones responsible for guarding and caring for the young, including providing food.

The species was originally discovered in 2005 and formally described in 2008 by a team of herpetologists led by Joseph R. Mendelson III. The frog is named in honor of the conservationists and herpetologists George B. Rabb and Mary S. Rabb.

It was officially listed as Critically Endangered by the International Union for Conservation of Nature and Natural Resources (IUCN) as of 2009. It is believed that the species may be extinct in the wild due to the epidemic of Batrachochytrium dendrobatidis in its native range.

Despite the efforts of several conservation teams, captive breeding programs have failed.

The last known female of the species died in 2009. It was survived by two other individuals, both males. On February 17, 2012, one of the two was euthanized at Zoo Atlanta in Georgia due to failing health.

Toughie was the last known surviving member of the species. He resided at the Atlanta Botanical Garden until his passing yesterday.

“Let’s hope with this historic event, we will finally stop and pay attention to the extinction crisis, not only for the sake of imperiled amphibians, but for humanity as well. After all, as they go, so do we.”

An amazing tribute to honor the K9 heroes who helped rescue victims at ground zero. May God Bless them and all of the lives...
Read more
News