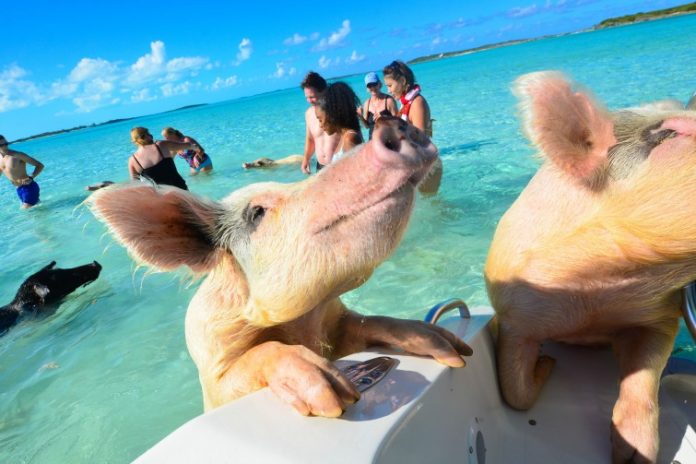 Sadly, this week, more than a half-dozen of The Bahama’s famous swimming pigs have been found dead in Nassau.

The famous pigs are visited by thousands of animal-loving tourists, celebrities, and even made a recent appearance on “The Bachelor”.

Tourists have been seen giving the pigs alcohol and junk food that the pigs cannot properly digest. They have also been seen riding them. This may have led to their recent deaths.

Wayde Nixon claims that he set four sows and one boar loose on the island in the 1990s. The idea was to create a sustainable food supply to tap into in the event of a catastrophe, but the Bahama pigs soon became loved by  thousands of tourists who would visit the island every year.

Only 15 pigs remain on the island and an investigation is currently underway to find the cause of their mysterious deaths.

Agriculture and Marine Resources V. Alfred Grey told the Nassau Guardian that the government would pursue restrictions that would keep tourists back from the beach.

The beloved pigs have received a burial at sea and will be missed by so many people that have come to visit them every year from around the world.

Previous articleHappy International Polar Bear Day!
Next articleABC News Walks With DxE As They Rescue A Dying Bird From A Cage-Free Farm

Breaking! Denny’s Now Offers Plant-Based Beyond Burgers In More Than 1700 Locations Throughout The U.S. & Canada

After the overwhelmingly successful Beyond Burger launch exclusively in Los Angeles restaurants, Denny's will now offer the popular plant-based burger made by Beyond Meat in...
Read more
News

A bill that would ban the buying and selling of shark fins in the United States was reintroduced in the U.S. House of Representatives by...
Read more
International News

Qatar Airways Cargo announced today that it is launching Chapter 2 of ‘WeQare: Rewild the Planet.’ The cargo carrier is committed to preserving wildlife and...
Read more
Load more