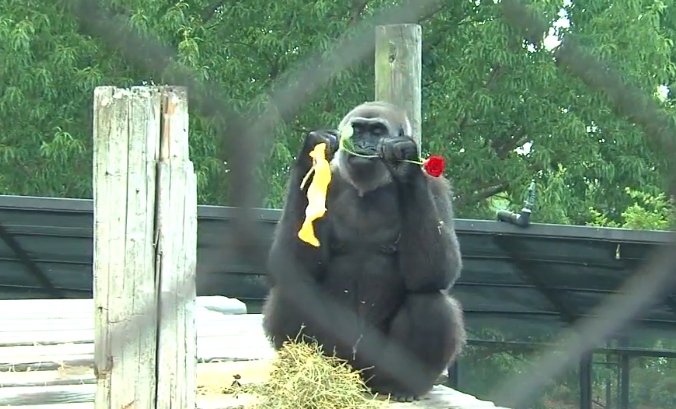 A Gorilla Bachelor Is Breaking Hearts In Arkansas

A 24-year old silverback gorilla named Kivu was relocated from Santa Barbara just over a month ago as part of a conservation effort to help save his species.

The Arkansas zoo is one of the few zoos participating in a conservation program that is dedicated to saving endangered species from extinction.

“Introductions are going really well,” said Lamor Williams, director of marketing and communications at the zoo. “Kivu was kind of shy when he first got here.”

Although all three of the lady gorillas in the zoo received a rose, it still remains a mystery as to which bachelorette Kivu will choose this year.

“We want to make sure everyone’s together, a good family before we start trying for a baby,” said Catherine Hopkins, one of the zoo keepers.

Zookeepers say that both Sekani and Adelina are both very interested in Kivu. Adelina, who is currently too young to mate, has been seen mimicking his actions.

Catherine, however, is less interested, and has been unable to get pregnant in the past. Zookeepers are hopeful Kivu will choose Sekani, Adelina’s mother. Adelina was the second gorilla to ever be born at the Little Rock Zoo.

Kivu was fortunately moved solely in order to save the species as gorillas are not only being hunted in the wild, but they are threatened by conflicts with humans and habitat destruction.

It is most important to protect these endangered gorillas in the wild where they belong. However, conservation programs serve as the last resort to help save this slowly diminishing species from disappearing forever.

Previous articleSurf’s Up! A Cat Catches Some Waves On A Swimming Dog
Next article500 Malawi Elephants Relocated To Benefit Conservation

135 wild animal species received protections against unsustainable international trade at the 18th Conference of the Parties to the Convention on International Trade in Endangered...
Read more
News

Entanglement in fishing gear is one of the many threats faced by the Atlantic humpback dolphin along its coastal range in western Africa. Photo...
Read more
Load more