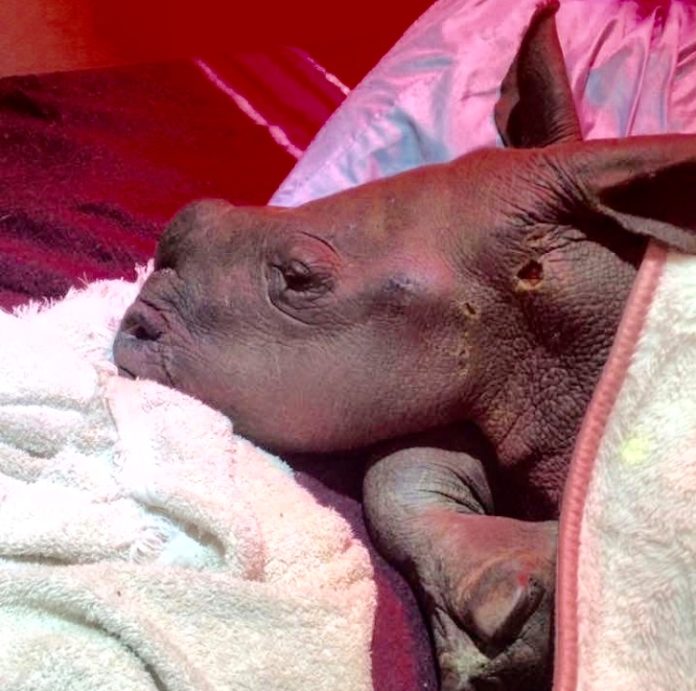 With Much Sadness We Report Baby Isibindi Has Passed

It is with many tears, a heavy heart and very mixed emotions that I write that little Isibindi passed away shortly before midnight after a very, very rough 56 hours.

She went through such deep sadness in her short life. I was so hoping and fighting to give her a second chance at life. A part of me feels a deep relief – the last two days were very difficult and she had so much to cope with.

Little Bindi left this earth lying in my arms (the orphanage had no power so I wrapped us both in a duvet to keep her warm) It never gets easier. RIP little Bindi – may your spirit fly free!

To the team on the ground here – humbled and proud. I have been with Isibindi constantly since she arrived a few days ago with no water, no power, wet cold conditions and security issues, this young and amazing group have made sure that the other rhinos have been cared for. Thank you to: Axel Tarifa, Shannon Westphal- very special people and Steven and Nicole.

May God Bless all of the orphaned babies who are fighting for their life! -WAN

It’s Save the Rhino Day! Join Saving The Wild & Jane Goodall In Urging For #JusticeForRhinos

Photo by Thomas D. Mangelsen Save the Rhino Day is annually recognized on May 1st and with the recent death of Sudan, the last male northern...
Read more
News

If a bill that was recently introduced in South Carolina passes into law, the owners of pit bulls and dogs perceived to be pit bulls will...
Read more
Load more