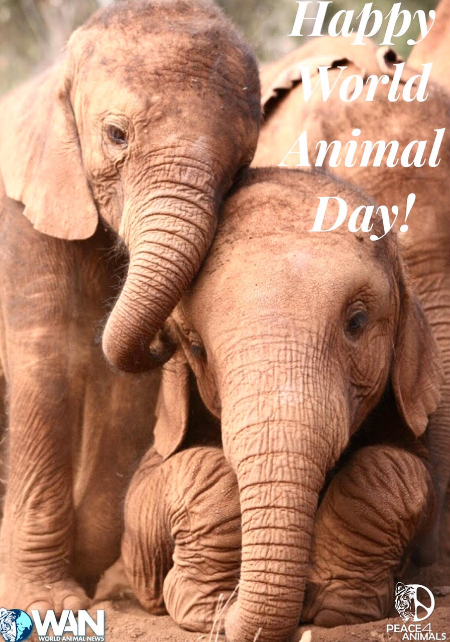 To achieve this, World Animal Day encourages animal welfare organizations, community groups, youth and children’s clubs, businesses and individuals to organize events in celebration of World Animal Day. Involvement is growing at an astonishing rate and it’s now widely accepted and celebrated in a variety of different ways in countries around the world.

Events are organized under the World Animal Day Umbrella to draw attention to animal issues – a vital catalyst for change.

Building the celebration of World Animal Day mobilizes people to take action now for a better future for animals and to protect our planet.

Throughout history, social movements (mass actions) like World Animal Day, have always been a major vehicle for people’s participation in politics, and key in fighting for social justice and reform. The lives of animals are profoundly affected by the actions of individuals, businesses, and nations.  It’s therefore essential that, as sentient beings, their rightful status as recipients of social justice is established and translated into effective animal protection.

Through increased awareness and education, we can help develop a compassionate culture which feeds into legal reform and social progress to make this world a better place for all living beings. A world where animals are recognized as sentient beings and their welfare is always considered.

There are other days to celebrate animals such as: World Day for Laboratory Animals on April 24th and World Wildlife Day on March 3rd which are recognized worldwide.

World Animal Day is the one day of the year that embraces all animals and the unique concerns of each, in every country. It’s a special opportunity to commemorate our love and respect for animals by doing something special to highlight their importance in the world.  It unites the animal welfare movement and mobilizing it into a global force for change. Participation in World Animal Day grows each year, with a huge variety of inspiring events being held in an increasing number of countries.

In 2003, 44 events were held in 13 countries around the world and this has now grown to an estimated 1000 events in 100 countries. YOU can join the movement and help enhance the visibility of World Animal Day by organizing an event in your city.

The Jane Goodall Act Was Recently Introduced In Canada And Will Become One Of The Strongest Animal Welfare Bills In History!

Canadian Senator Murray Sinclair has partnered with Dr. Jane Goodall to introduce the Jane Goodall Act, which, when passed, will become one of the...
Read more
News

The Dhyan Foundation, a spiritual and charitable organization has issued an urgent plea for more people to sign a rapidly growing Change.org Petition “to...
Read more
News

Photo from Animal Legal Defense Fund Justice, an eight-year-old horse, is a party to a lawsuit filed yesterday against his former abuser to recover the...
Read more
Load more