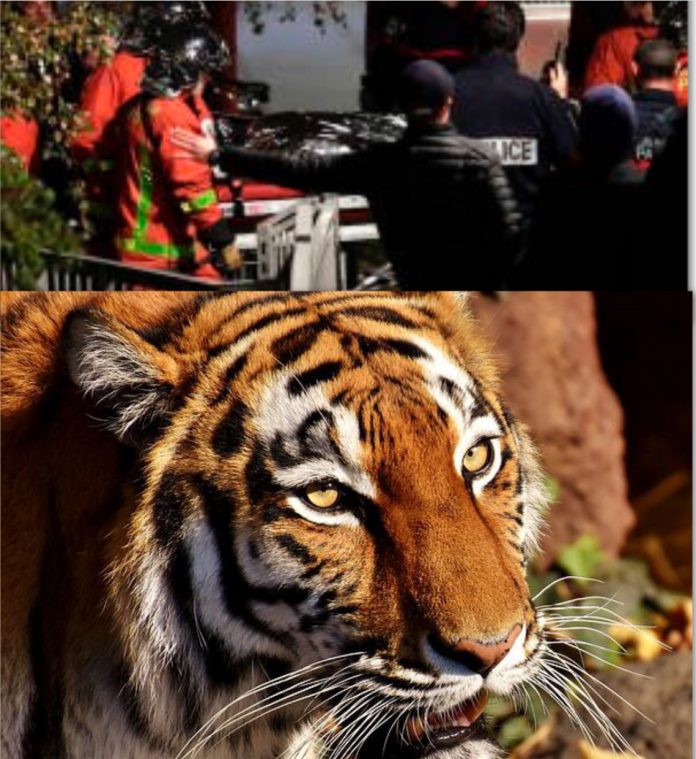 Heartbreaking News! Tiger Killed After Escaping A Circus In Paris

Police officials and rescue personnel gather beside a vehicle after a tiger was shot in Paris, Friday, Nov. 24, 2017. / AFP / Getty Images / Thomas Samson

Sad news as a tiger escaped from the Bormann-Moreno Circus in Paris on Friday, and roamed the streets of the French capital before being killed.

Per AP, police said that the big cat was “neutralized” by a staff member from the circus near a bridge over the River Seine, about two kilometers (1.24 miles) from the Eiffel Tower.

Sadly, police authorities tweeted “all danger is over” alongside a tiger emoticon. But what about the Tiger?

A police official in Paris confirmed that the tiger had been loose for a while on Friday but that there had been no attacks reported.

Concerned residents posted pictures of the big cat on social media who’s body was limp, it had sadly been shot and killed.

Many people in Paris and around the world are outraged and want answers. No animals should be in captivity for entertainment and greed.

Circuses and captivity for all wildlife must end!

Victory! While Virginia Becomes The 4th U.S. State To Pass Anti-Animal Testing Legislation For Cosmetics; Help Us Ensure That California Is Next!

awesomeocean.com The recent discovery of a dead endangered vaquita in the Gulf of Mexico late last month marked the fourth of the world’s smallest porpoise to be...
Read more
Load more