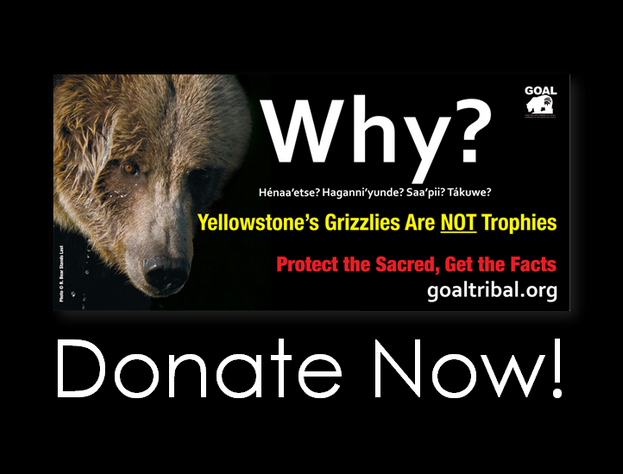 In 2017, the states of Wyoming, Montana and Idaho plan to open trophy hunts on Yellowstone’s iconic grizzly bears.   An unprecedented alliance of fifty Tribal Nations, supported by the Assembly of First Nations, has coalesced around us to oppose the removal of federal protections from the sacred grizzly bear. Delisting the grizzly from the Endangered Species Act will enable the trophy hunts to begin.

GOAL Tribal Coalition is at the forefront of this fight. The grizzly bear is sacred to many Tribal Nations, and is considered a grandparent, a teacher, a healer and the first medicine person, among other qualities.  The grizzly bear is integral to tribal cultures and ceremonial life-ways. Many sacred sites, as yet unprotected, lay in our ancestral homelands where these trophy hunts will take place if we do not prevail.
If protections are removed from the grizzly, protection of two million acres of Greater Yellowstone will follow; some 28 mines are already waiting to become operational.

We need to raise $6,500 for our “Why?” billboard campaign which not only raises awareness for what is a struggle for the spirit of the earth, the very soul of who we are and what we may become, but also provides empowerment to our communities: these boards are in our image, featuring our languages!

So far we have been able to raise two of these billboards, one near West Yellowstone, Montana, and another in Cody, Wyoming, but we are striving for six in the environs and population centers around Greater Yellowstone to catch the attention of Yellowstone’s expected 4,000,000 visitors this year, so that people know what is being done in their name.

GOAL is a volunteer organization that was founded on the Northern Cheyenne reservation. We are not an NGO with a paid staff and fundraising machine; we are not an advocacy group with affluent backers – we are the definition of a grassroots organization – and our roots are on the prairie and plains.

We have already presented a viable alternative plan to US Fish and Wildlife Service (FWS) Director Dan Ashe, and the states, but this has so far fallen upon deaf ears. The tribal alternative to trophy hunting is to reintroduce the sacred grizzly to sovereign tribal lands in the Great Bear’s historic range, where biologically suitable habitat still exists. But FWS and the states, driven by political special interests, choose to favor trophy hunters and corporate profiteers over the cultural, economic, and environmental revitalization of tribal communities.

We have generated significant media coverage, and secured the support of major political figures (see here, http://bit.ly/28ReCMs, and http://1.usa.gov/28TOWza) But we can’t bring this issue to public attention without support from people who do not want to see grizzlies trophy hunted.

Please help us give voice to our relative, the sacred grizzly bear, and in so doing preserve our cultures and our ancestral homelands that you, too, now consider sacred.

Join with us; we cannot do this without you, so please spread the word and SHARE this campaign across social media. Tell your friends, family, coworkers – anyone you know who respects wildlife and does not agree with trophy hunting.  We send our gratitude for any $ donation you can send to make sure these much-needed billboards go before Yellowstone’s expected 4,000,000 visitors.

PS. Please do watch our video and don’t forget to hit SHARE! We know that 7 seconds of griz-hunting is tough to watch, but its a reality. If people don’t understand what we are fighting they can’t understand why we need their support.

Previous articleMan Lights Fireworks Near Dog, Later Charged With Animal Cruelty
Next articleThe Legend Of Tarzan Cast Teams Up With Nonprofit To Save Elephants

It is with heavy hearts that WAN shares the sad news that K-9 Piper, the revered wildlife control canine who worked at Cherry Capital...
Read more
News

Breaking! Washington Wildlife Agency Authorizes The Killing Of The Last 2 Members Of An Endangered Wolf Pack

1. First-Of-Its-Kind Elephant Rewilding Project Plans To Release A Herd Of 13 Captive Elephants From The UK Back To Their Ancestral Homeland Of Kenya Animal...
Read more
Load more