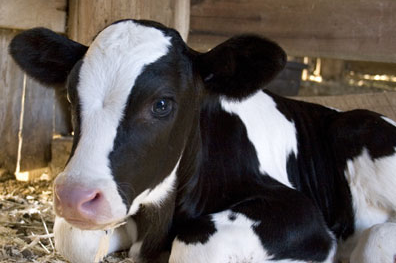 Human or Calf? The Dairy Industry Exposed For The Animals & Our Health!

For as long as I can remember….Growing up in a rural town in England, it seems that we were conditioned to believe that we needed Cow’s “Milk” to survive.

It’s very interesting looking back and writing this article now, because as a child growing up in the 80’s-90’s I drank a LOT of milk. Every night before I went to bed, I had a glass of milk. It never occurred to me for a second that maybe it was the milk that gave me a bad stomach, or sometimes breakout my skin.

Milk ads were on billboards, commercials, in schools, on every menu and in almost every meal; it was also the only option available.

Fast forward to 2017 and we now have at least 10 different types of delicious plant and nut-based milk to choose from. You can even have it in cereal, make ice cream and cheese out of it, also cook with it, there are endless possibilities.

I personally made this shift 7 years ago after numerous documentaries, especially “Cowspiracy”- which I strongly recommend to anyone wanting to further their awareness.

So what are the main reasons to Ditch Dairy?

Again, it seems there is a lot more than meets the eye to this Romanticized industry which in some ways, is even more brutal and exploitive than the meat industry.

The Dairy/Agriculture industry has funded the government in many countries, for many years and has paid a LOT of money through advertising and the media to convince us all that Cows’ milk is meant for humans when in fact, it seems the opposite is true.

Dairy cows are constantly kept pregnant to keep them lactating.  From the age of 12 months, they are constantly pregnant. They are kept in cramped conditions in what the industry calls “rape racks” and repeatedly inseminated with bulls sperm – whether it’s an organic farm or a regular farm, the same is true.

When they repeatedly and finally give birth –  if it’s a boy, they are immediately sent off and killed for veal, and if it’s a girl, they become a dairy cow, just like their mother.

A Mother Cows’ bond with their young is very strong and affectionate. They will sometimes cry out for days after their baby is born – but obviously to no avail. Aside from being constantly injected with hormones and antibiotics to make them produce more milk faster, the udders frequently become infected and inflamed with Mastitis – which causes the milk to contain large amounts of pus and somatic fluid. Somatic cells count greater than a million per teaspoon and are abnormal, almost always caused by a common mastitis infection. When a cow is infected, greater than 90% of the somatic cells in her milk are neutrophils, the inflammatory immune cells that form pus. The shocking fact is the average somatic cell count in U.S. milk per spoonful is 1,120,000.

A Dairy cow will usually last for around 4-5 years before they become prematurely aged and exhausted with being constantly kept pregnant, which is when they become a “downer” and are then slaughtered for beef.

The Natural life span of a cow is 20-25 years. It has been proven that cows are complex emotional and very intelligent animals, who have a long memory. Animal behaviorists have found that cows interact in socially complex ways, developing friendships over time and sometimes holding grudges against other cows who treat them badly. This is why if you are a vegetarian, you may want to do some additional research into going vegan if you think eating dairy is ok.

Cows milk has long been attributed to Osteoporosis prevention.  The Harvard Nurses’ Health Study,  followed over 75,000 women for 12 years and showed no protective effect on the human bone from increased milk consumption, fracture risk/osteoporosis prevention. Instead it showed that an increased intake of calcium from dairy products was associated with A HIGHER fracture risk. Sounds crazy?

An Australian study showed the same results. Additionally, other studies have also found no protective effect of dairy calcium on human bone. You can DECREASE your risk of osteoporosis by reducing animal protein, increasing intake of fruit and vegetables, exercise, and obtain HIGHER calcium intake from plant-based foods such as: leafy green vegetables, lentils and beans.

Dairy produced (cheese, ice cream, milk, butter, yogurt) contribute large amounts of unhealthy/saturated fat and cholesterol to our diet.  Diets high in high saturated fat can severely increase the risk of several chronic diseases including cardiovascular disease.  A Low-fat vegan diet in combination with exercise has been proven in numerous worldwide studies to not only prevent heart disease, but to also reverse it.

Several cancers, including ovarian cancer, breast cancer and prostate cancer have been linked to the consumption of dairy products. The milk sugar lactose is broken down by the body into another sugar, galactose which is broken down by enzymes. According to a study by Daniel Cramer, M.D. and his colleagues at Harvard, when dairy product consumption exceeds the enzymes’ capacity to break down galactose, it can build up in the blood and affect a woman’s ovaries. Some women have particularly low levels of these enzymes, and when they consume dairy products on a regular basis, their risk of ovarian and breast cancer can be triple that of other women.

Prostate cancer has also been linked to consumption of dairy products, presumably related, at least in part, to an increase in a compound called insulin-like growth factor (IGF-I) found in cow’s milk. Other nutrients that increase IGF-I are also found in cow’s milk. A recent study showed that men who had the highest levels of IGF-I had more than four times the risk of prostate cancer compared with those who had the lowest levels.

Dairy products are hard to digest and well-studied in its relationship to cancer and diseases. Fruit, vegetables, nuts, seeds, grains and plant-based protein, help extend longevity and promote beautiful skin to age slowly.  Our skin is the largest organ on our body which reflects what the internal body can’t get rid of – the skin will try to do so itself. This is especially true when it comes to the liver and digestive system. When you consume a lot or in some cases a little, dairy –  the skin usually takes a major hit. This may be through acne, redness, blotchy or lackluster skin> Most people notice a big improvement in their skin when they ditch dairy. This is because our skin isn’t left to do all the work itself to detox dairy.

Dairy inflames our stomach lining, which is why it leads to many stomach disturbances and intolerances. These can also lead to autoimmune disease and other digestive disturbances along the way such as: bloating, constipation, diarrhea, or even long-term Irritable Bowel Syndrome (IBS). Many people who suffer from serious disorders such as Crohn’s disease, find that when they ditch dairy – natural healing starts to occur, as it does with numerous other diseases.

Even if I didn’t know about all the important health issues and implications with dairy, for me, the torture and misery these sensitive and emotional animals go through is worth me Ditching Dairy every single day.

I truly look forward to a time in the near future when Cow’s milk being produced for human consumption, will again be a thing of the past!

This week, the Center for Biological Diversity tripled the reward to $15,000 for information leading to an arrest and conviction in the July 2018 shooting...
Read more
International News