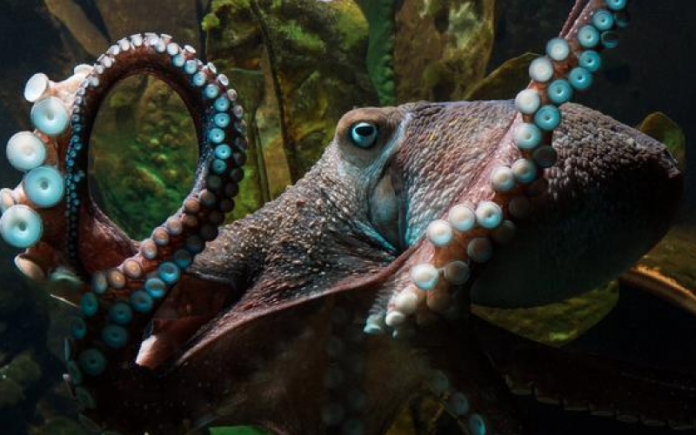 Inky the Octopus Escapes From Aquarium & Heads Back To Ocean Home

Inky, the clever New Zealand octopus, slipped out of his tank at the National Aquarium of New Zealand to make his way back to his ocean home. Inky’s escape happened earlier this year, but the news hit New Zealand press on Tuesday.

Aquarium manager Rob Yarrall says “the lid to the octopus’ tank was left slightly ajar after maintenance one night.” “He found this rather tempting, climbed out, and managed to make his way to one of the drain holes that go back to the ocean, and off he went, and didn’t even leave us a message, just off and went!”

“Inky the octopus didn’t even try to cover his tracks. By the time the staff at New Zealand’s National Aquarium noticed that he was missing, telltale suction cup prints were the main clue to an easily solved mystery. Inky had said see ya to his tank-mate, slipped through a gap left by maintenance workers at the top of his enclosure and, as evidenced by the tracks, made his way across the floor to a six-inch-wide drain. He squeezed his football-sized body in and made a break for the pacific.” says: The Washington Post.

“Octopuses are incredibly smart and fabulous escape artists, and it’s absolutely not surprising that he saw an opportunity to explore and he took it,” author of “The Soul of an Octopus,” Sy Montgomery said, Octopus escapes from aquariums are common. A 3-inch-diameter sucker on a giant Pacific octopus can lift 30 pounds.

Inky came from the wild and was given to the aquarium in 2014 after a fisherman and an aquarium volunteer rescued him from an ocean cray pot near Pania Reef.

It is surprising at how small the drain is that Inky managed to escape from, and the route in which he took: See Here.

We are hoping that Inky’s escape was successful, and that he is now swimming free in the ocean where he belongs.

Progress Is Being Made; India Is Establishing Their First Government Centre On Alternatives To Animal Testing In Biomedical Research

In a historic move to advance human medical progress and move away from reliance on monkeys, dogs and other animals as testing models for...
Read more
News