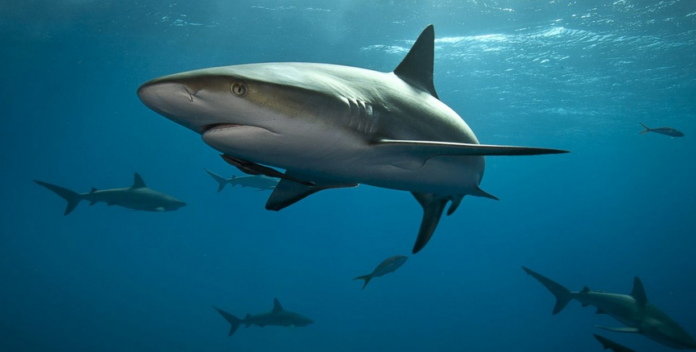 Is Your Makeup Killing Sharks?

Most animal lovers wouldn’t dream of harming an animal for fashion. Fur? No, thank you. Leather? I don’t think so. Yet they might be unknowingly killing sharks — and highly endangered kinds on top of that — for their beauty routine.

Unbeknownst to most, one little ingredient in products like sunscreens, moisturizing lotions, lip balms, lipsticks and face creams is responsible for the deaths of over 3 million sharks annually.

“Squalene is a naturally occurring compound found in large quantities in the liver of sharks,” explains the shark protection group Shark Trust. “A sharks’ large oily liver helps to control its position in the water column, however many cosmetics companies use the oil (and an associated compound called squalane) as a base for their moisturizing and skin care creams, lipstick and gloss, as it is non-greasy and softens skin.”

Sharks are then killed for their livers. The process is sometimes very similar to the now infamous shark finning but instead of taking the animal’s fin for the production of questionable medications and shark fin soup and tossing the rest of the body back in the ocean to die, fishermen take the animal’s liver. The practice is known as shark “livering” and since most deep sea sharks have larger livers, they are its primary targets.

The horrifying attack on sharks is having a toll on their population, says Bloom, a nonprofit organization dedicated to saving the marine environment. Sharks used to be fished in the North-East Atlantic but now the practice has moved south because of declining populations.

Since sharks reproduce slowly — they start at 12 or 15 years of age and only have one to two pups during each reproductive cycle — 11 types of sharks are at risk of extinction and 74 types are listed as threatened.

What is one to do then if they want to protect sharks and they have already ditched the shark fin soup and don’t contribute to bycatch by eating a plant-based diet? Reading the labels of all cosmetics is the best bet.

“Non-shark squalene can be created synthetically or extracted from vegetable sources like amaranth seed, olives, palm, rice bran and wheat germ,” explains beauty blogger Tricia Chaves. “Look for the words ’100% plant-derived,’ ‘vegetable based’ or ‘vegetable origins.’ If the label doesn’t indicate its specific source, ask the manufacturer if a product contains squalene derived from sharks.”

Due to pressure from animal protection organizations, major brands like Unilever, L’Oreal and Estée Lauder have agreed to no longer use squalene on any of their products so those are safe as well — though they’re still tested on other animals.

And for those wanting to swim the extra mile for sharks, cruelty-free brand LUSH has a special edition Shark Week soap made with nourishing seaweed and all proceeds from sales go directly to grassroots organizations working to save sharks around the world.

Previous articleHave Fun On The Fourth Of July, But Also Protect Your Pets
Next articleDHL Delivers Black Rhino Previously In Zoo To Natural Homeland In Africa

In a devastating decision by the Government of Botswana, they have confirmed this morning that the temporary ban on hunting elephants and other wildlife will be...
Read more

A new delicious plant-based restaurant is coming to Costa Mesa, California, this Spring. VEG’D is an innovative vegan drive-thru, fast-food concept that was created by Christine...
Read more
News

Heroes Rescue A Dog Stuck In A Frozen Lake

A heartwarming rescue story of a dog stuck in a frozen lake. Thank God for these amazing heroes 🙏❄️🙌 🌍
Read more
Load more