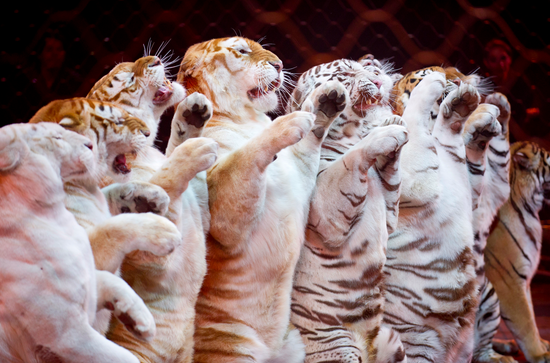 The Jersey City Council is considering a bill that would ban the use of wild and exotic animals as entertainment.

If passed, the city would join other counties and cities nationwide in the passing of laws aimed at banning animals as circus performers. This is the first such law proposed in New Jersey.

Mayor Steve Fulop has taken a stand against circuses. He is rumored to be in the running to replace current Governor Chris Christie who has a troubled animal welfare record.

Fulop: “We had a circus recently visit Hudson County with elephants and other circus animals which really bothered me. I know there are other things in Jersey City that impact lives which are a priority and we are working on those everyday from crime to education to parks, but this is a side project for me that I hope to see progress on. Town by town, we want to convince my fellow mayors to ban this until there is a complete ban in NJ from using circus animals.” 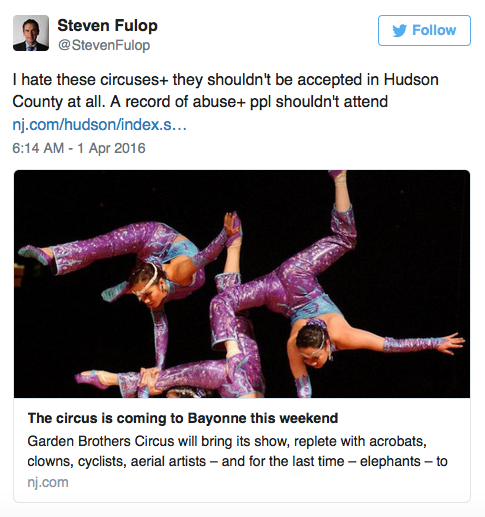 City spokeswoman Jennifer Morrill: “We are following Bergen County and in order to expand forward, the first and important step is setting an example in our home city.”

In addition to placing focus on circuses, the law would also ban trade shows, carnivals, petting zoos, parades, and other attractions in which animals are trained to perform, give rides, or fight.

Spokesman for Ringling Brothers and Barnum & Bailey’s Circus, Stephen Payne, as expected, is standing against the bill, categorizing it as “political grandstanding” on the mayor’s part.

Payne also insists that he’s not aware of any circuses passing through New Jersey, and states that current state and federal laws would protect animals if circuses did decide to come to the city.

He also added that when his circus travels to Newark, officials inspect them during unexpected visits. “We’re proud of our animal care,” he said.

Circus animals are subjected to prolonged confinement, training with cruel tools such as bullhooks, are made to stand up for extended periods of times (elephants, in particular), and often experience other forms of cruelty and abuse.

Animal welfare protestors nationwide have come out in droves to stand up against “The Cruelest Show On Earth” when the circus arrives in their town. This outrage must continue until all states, counties, and countries ban animals as entertainment.

WAN Exclusive: Urgent Help Needed To Stop The Destruction By Martabe Goldmine Of Rainforest Habitat Of The Last 800 Critically Endangered Tapanuli Orangutans In...

Photo of rare Tapanuli Orangutan by: Maxime Aliaga  Tapanuli orangutans were classified as a new great ape species found in Sumatra, Indonesia, in 2017, there are...
Read more
Breaking News