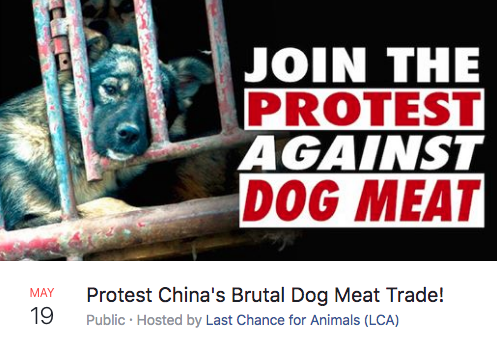 Please join Last Chance for Animals (LCA) and Citizen Lobbyists for H.Res. 30 in speaking out against China’s brutal dog meat trade — including the gruesome Yulin Dog Meat Festival, which is scheduled to happen again on June 20, 2017!!

China’s dog and cat meat trade is a horrific and unregulated commercial industry that brutally tortures animals for profit. An estimated 10 million dogs and 4 million cats are slaughtered in China each year for meat. The dogs and cats are tied up, trucked long distances in cramped wire cages stuffed with dozens of other animals, then beaten, burned or boiled alive.

The Yulin Dog Meat Festival, which occurs each year on the summer solstice, is a particularly heinous display of cruelty created by the dog meat trade to sell more meat.

Global outrage, along with education and the furthering of progressive ideals in China, has resulted in a decline in dog meat consumption. Far fewer dogs were killed in Yulin in 2016 than in years passed, and the butchers now keep their activities hidden instead of displaying dogs and cats on the streets.

But the violence is still far from over — and it must be stopped NOW!

Join us at the Chinese Consulate in Los Angeles on Friday, May 19, 2017 from 11am to 1pm, as we speak out on behalf of the dogs and cats of China!

Not in Los Angeles? Join one of these rallies across the United States, sponsored by Citizen Lobbyists for H.Res. 30:

Three-Year-Old Boy Found Alive After He Went Missing In The Woods In North Carolina; Said That A Friendly Bear Kept Him Safe, God Sent...

Left Photo from Breanna Hathaway's Facebook A 3-year-old North Carolina boy who disappeared last week said that a bear kept him safe while he was lost...
Read more
News

NOAA Law Enforcement Offers $20,000 REWARD To Anyone With Information Leading To The Conviction Of The People Responsible For Brutally Killing Two Dolphins In...

Photo credit: Florida Fish and Wildlife Conservation Commission NOAA’s Office of Law Enforcement is offering a reward of up to $20,000 for information that leads...
Read more
Breaking News

Photo from California Department of Fish and Wildlife, Warden Piedra An example of compassion, inclusiveness, and the power that each person has to make a...
Read more
Load more