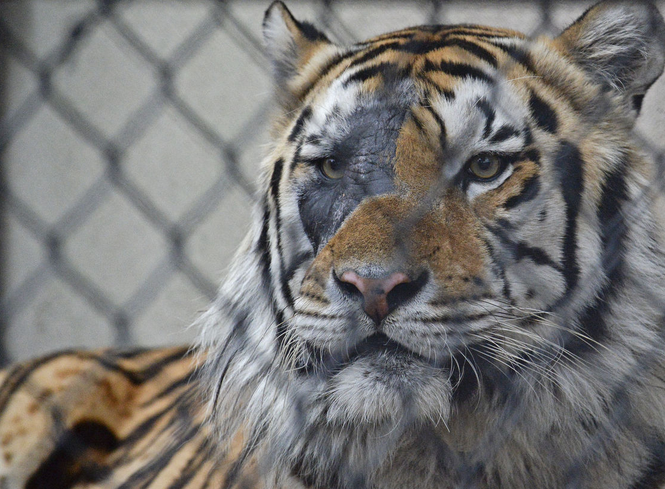 Louisiana State University’s live 420-pound mascot, Mike Tiger VI, was recently found to have cancer and is undergoing radiation therapy for a spindle cell sarcoma near his nose.

An LSU spokesperson claims that the large dark spot around the tiger’s right eye has formed naturally from his skin’s melanin in order to protect him from sunlight. There is no word as to whether the hair will grow back, and officials previously said that the 11-year-old mascot wasn’t expected to lose his hair. 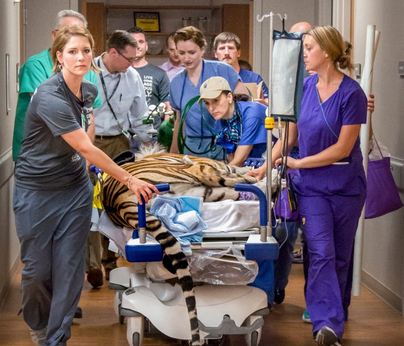 The cancer, which is located on the right side of his face, was diagnosed after caretakers noticed swelling round his eye. His treatment plan involves stereotactic radiotherapy, which uses a beam of X-rays pinpointing the tumor. For this treatment, he is sedated and taken to the Mary Bird Perkins-Our Lady of the Lake Cancer Center in Baton Rouge, Louisiana.

Mike’s cancer is incurable and inoperable, and he is expected to only survive for several years at the most. The radiation treatment is anticipated to extend his life. 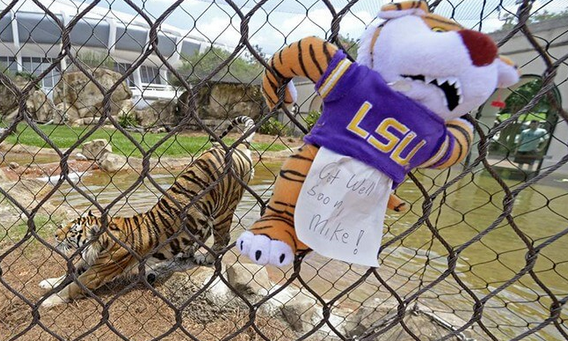 “In these days of animal rights, it’s hard to justify having any animal kept for rah-rah value, and we’re using Mike to educate people about conservation issues,” said Dr. David Baker, Mike’s vet and director of LSU’s Division of Laboratory Animal Medicine.

“Typically, there are students who come to me and say, ‘I have wanted to take care of Mike the Tiger since I was a child.’ We want them to have that closeness, affection and love for Mike.”

After the previous tiger mascot’s death, PETA urged the university not to replace him.

Former LSU chancellor Sean O’Keefe rejected PETA’s request, and stated that the school would indeed bring in a new tiger. O’Keefe also argued that four of the previous five Mikes lived to be at least 17 years old, nearly twice the average lifespan of tigers in the wild (8-10 years). He explained that tigers were currently a critically endangered species, and insisted that captivity was necessary for conservation.

Great Cats of (Idaville) Indiana, an Indiana-based large cat and carnivore rescue facility, donated the current Mike to the school. The rescue was eventually shut down due to complaints of neglect resulting in a removal of its permits.

Mike’s enclosure is located in an extremely high-traffic area of Baton Rouge, Louisiana, near the university’s stadium, which is known for its deafening crowds. When he is well, Mike is brought onto the field within an enclosed trailer during the insanely loud home games. This “tradition” has fortunately been criticized, but caretakers maintain that Mike is not brought onto the field without his consent. 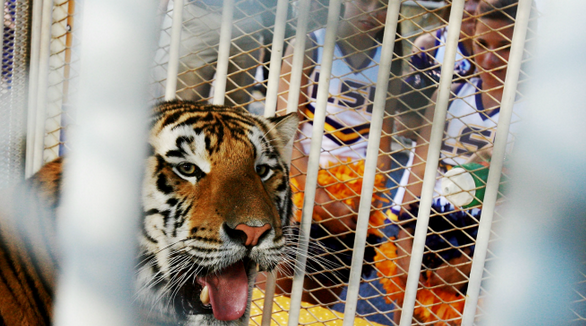 LSU is also located near what has been dubbed Cancer Alley, an area within the city that has high cancer rates due to its proximity to lines of chemical plants, including Exxon.

Toxics Release Inventory (TRI) data showed that the state produced 9,416,598,055 pounds of waste in 2000. In 2002, Louisiana had the second-highest death rate from cancer in the United States.

With this in mind, it is difficult to dispute his safety, regardless of the fact that Mike’s enclosure is now over 15,000 square feet.

Could the horrible environmental conditions have caused Mike’s cancer, which is located near his nose?

Please take action and respectfully ask LSU President F. King Alexander to retire Mike to an accredited sanctuary, as well as pledge to not bring in another tiger after Mike’s untimely passing.

Previous articleNJ Senate Passes Bill To Require Pet Stores To Sell Only Shelter And Rescue Animals
Next articlePetition To University Of Alberta: Save Andy the Polar Bear

Six Trafficking Arrests Made In Mexico For The Illegal Poaching Of Protected Totoaba; The Main Reason For The Decline Of The Critically Endangered Vaquita...

The Gentle Barn enters its 20th Year of saving abused and neglected farm animals and providing them with sanctuary for rehabilitation and healing. With three...
Read more
News

California’s foie gras ban was upheld this week by U.S. Central District of California Court Judge Stephen V. Wilson, however, the caveat is that if the transaction takes...
Read more
Load more