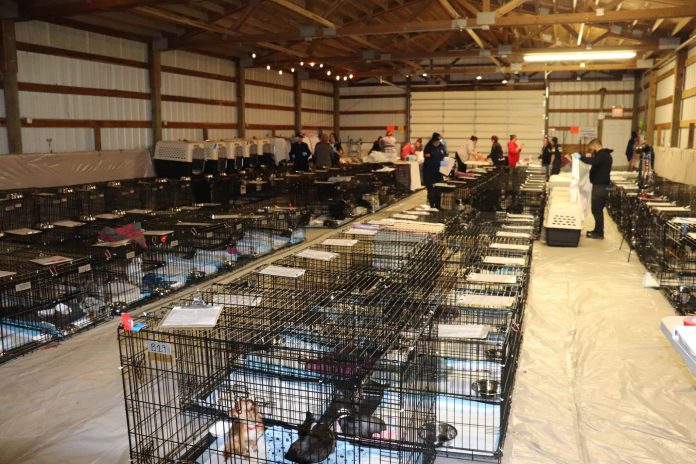 The Stevens County Sheriff’s Office served two search warrants on Tuesday in Southern Stevens County, Washington, as part of an investigation into illegal dog breeding operations. One operation was located in the Ford area and the other in the Suncrest area of Nine Mile Falls.

According to the department, during the service of the search warrants, members of SCRAPS (Spokane County Regional Animal Protection Service) and local veterinarians were on scene to help contain, catalog, and examine the animals.

“At the Ford location, investigators discovered approximately 89 dogs and puppies in various states of health conditions. One puppy was near death,” the department posted on its Facebook page. “The dogs were living in filth and investigators had to wear hazmat suits while at the scene. These dogs were contained within a 10×60 mobile home unit occupied by two people.”

The police department went on to explain that 166 dogs, in various states of health. were also found to be living in filthy conditions in a split level home at the Suncrest location.

Authorities initially believed that there would be approximately 150 dogs total including puppies. They quickly realized that the 255 dogs that were seized between the two scenes, quickly outnumbered the resources in place. 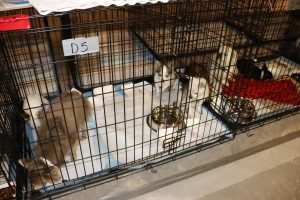 The operation had been planned for several weeks in order to overcome the logistical hurdles in seizing, housing, feeding, and providing medical attention to this many dogs. American Humane, as well as, HEART (Humane Evacuation Animal Rescue Team) came to Stevens County several days prior to set up a temporary shelter and housing.

“Without the assistance of all of the agencies involved, this operation would have been impossible to undertake by the Sheriff’s Office alone. We are now diligently working to be able to effectively deal with the large amount of dogs. Fortunately, almost all of the dogs seized are small breeds.

As per the Sheriff’s department, the  occupants of both residences, whose names are not being released at this time pending official charges from the Stevens County Prosecutor’s Office, are likely facing charges that could include cruelty to animals and violations of dog breeding statutes. Felony charges in at least one instance are also possible.

“At this time, these dogs have not been relinquished by their owners and are still legally theirs,” HEART of Spokane noted on its website. “When these dogs become legally adoptable, we will post information on our website about the local organizations that will be handling the fostering and adopting.”

If you would like to help these animals, please donate to HEART of Spokane HERE!

In Response To A Lawsuit By Conservation Groups, The U.S. Forest Service Will Halt Road Construction This Summer In Northern Idaho To Protect Grizzly...

Breaking News! Urgent Help Needed To Save 35 Baby Elephants Waiting To Be Exported From Zimbabwe To Zoos In China

Photo by Oscar Nikala from Humane Society International The recent capture of another 35 baby elephants who were torn from their mothers by Zimbabwe Parks and...
Read more
Load more