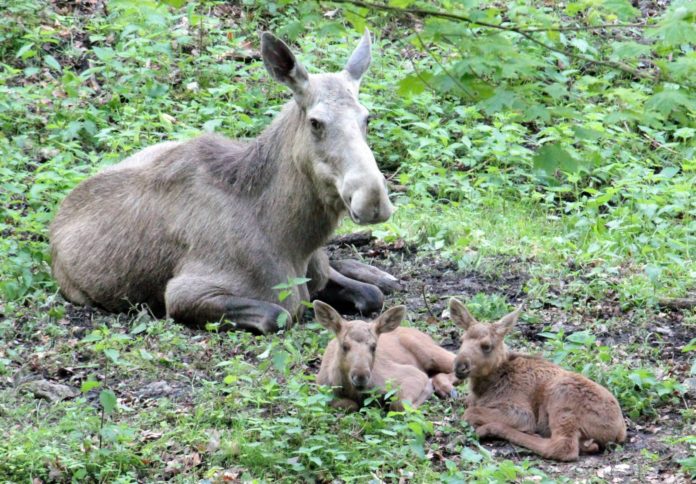 Conflicting accounts have been revealed as to the questionable circumstances that led Alberta Fish and wildlife officers to tragically kill a mother moose in a local park.

The cow moose and her two calves were reportedly wandering in the St. Albert community of Red Willow Park when the shooting took place yesterday morning. 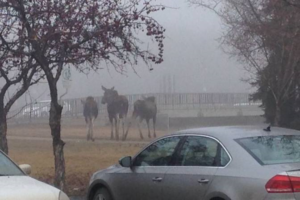 Apparently, according to Huffington Post Canada and other media outlets, the Royal Canadian Mounted Police (RCMP) claimed that the moose was killed after it charged one of the officers who was trying to herd the animals out of the park.

But numerous eyewitnesses, argued that was not the case.

According to Quentin Innis, who has since filed a complaint with both the RCMP and Fish and Wildlife about the “unnecessary” killing, it was the officers rushing the animals that, he believes, caused the officers to lose control of the situation.

“I totally get it, wildlife officers have a hard job, cops have a hard job, but what I saw was a group of five individuals moving toward a wild animal,” Innis said. “Wild Animal 101 is that you don’t separate mothers from their young, that’s grilled into every Canadian kid from the time they are six years old, so I don’t get why they thought it was necessary to approach the moose.” 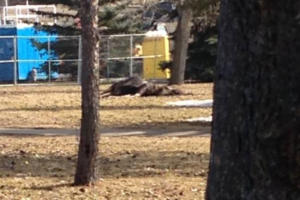 Elaine Vrolijk, further explains that she had observed the three moose peacefully wandering the park for more than an hour before the attack.

“If she charged, that was a situation they created,” said Vrolijk who reportedly took photos of the moose from her office across the street. “They were very calm and the only time I saw them panicked was after the first two shots.”

Outraged, Vrolijk is questioning why the wildlife officers did not tranquilize the mother and her calf before trying to move them out of the area. 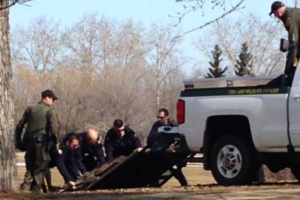 Brendan Cox, spokesman for Alberta Justice, maintains that the officers did not want to kill the moose, but they were left with no other option.

Cox said that “wild animals can be very unpredictable, even for Fish and Wildlife officers and others with extensive training…Unfortunately in this situation, the cow moose charged one of the fish and wildlife officers, and with the life and well-being of that officer in clear and present danger, the officers on scene had no option but to use lethal force to stop the moose mid-charge.”

Alberta Justice, which said “a cow moose can be quick to forcefully protect their young,” added that the Mounties had been called in to help Fish and Wildlife officers after responding to complaints about the animals.

The calves were reportedly “safely immobilized” and taken out of the town.

“This and other tragic situations recently that are all too similar can be prevented if the public and officers learned how to peacefully co-exist with wildlife instead of being too quick to grab a gun.” -Katie Cleary, President of WAN

The Trump administration’s 2019 budget proposal contains an unprecedented $2 billion (14%) cut for the Department of the Interior and a $2.8 billion (31%) cut for...
Read more
News

Breaking! The ‘PREPARED Act’ Aims To Save Animals From Natural & Man-Made Disasters

Photo from Cruelty Free International Tragically, fires, floods, and earthquakes can cause intense suffering and death to the millions of animals trapped in commercial and...
Read more
Load more