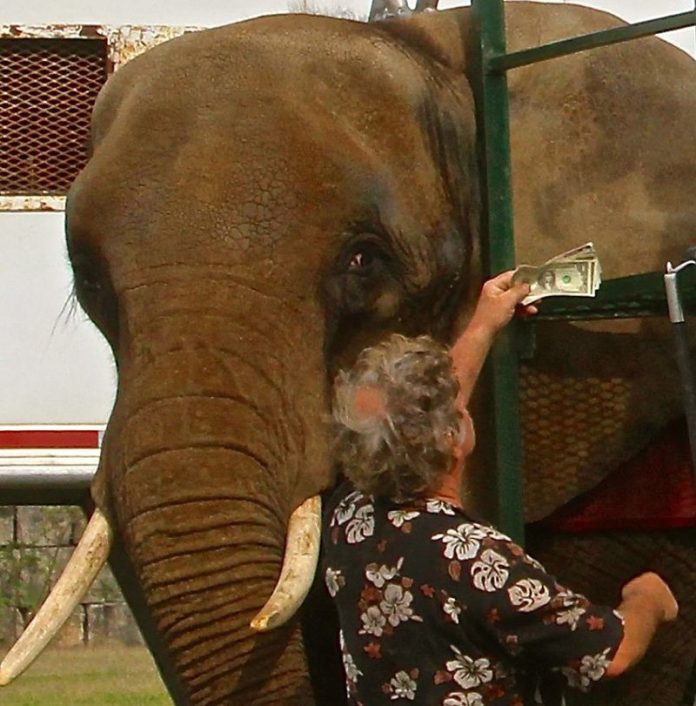 Nosey The Elephant Finally Rescued From Years Of Enslavement

WAN and Peace 4 Animals are thrilled to report that Nosey the elephant who was held captive for most of her life has finally been saved.

Today, Lawrence County District Court in Alabama finally issued a seizure order for her notorious owner Hugo Liebel, who used Nosey for years to make money off of her in shows for entertainment, as well as giving elephant rides. Sadly, many unsuspecting people who saw Nosey had no idea the horror she had been living in.

Nosey has arthritis, and it is agonizing. Despite her debilitating ailment, her owner Hugo Liebel still used her for financial gain, even when it was visible that she had a hard time walking.

Nosey is a 33-year-old female African elephant. She was captured as a one-year-old baby after her mother and herd were killed. She has been performing since she arrived in the U.S., and has been with The Liebel Family Circus based in Florida for 28 years. Liebel has been cited over 200 times by the U.S.D.A. and has received 33 direct violations from the AWA (Animal Welfare Act). Yet, he was able to continue using Nosey to make money off of her.

Nosey also suffers from many other ailments including a terrible skin and foot condition and is forced to continue to give elephant rides despite all of this.

Nosey’s transport from state to state is a tiny trailer, not adequate or in the least bit fit to house an animal of her size. She is also shackled by her feet barely able to move.

We are trilled that justice has finally been served. Nosey will now be in a home that cares for her well-being and is not interested in making money or using her for entertainment.

We pray that Nosey will live in peace and harmony for the first time in her entire life. Finally free from enslavement!

Breaking! Animal Save Movement Is Outraged By The Feeble & Unjust Charges Brought Against The Truck Driver Who Ran Over Animal Activist Regan Russell

Animal Save Movement is outraged at the Halton Regional Police Service for bringing charges of “Careless Driving,” against the driver of a pig transport truck in...
Read more
News

WAN Talks With Director Of The Humane Society Of Louisiana About Horrific Case Of A Decapitated Cat Found “Displayed” On A Sidewalk In Upscale...

(Not the cat that was found with its head decapitated) Yesterday, WAN was fortunate to spend a few minutes on the phone with Jeff Dorson,...
Read more
Load more