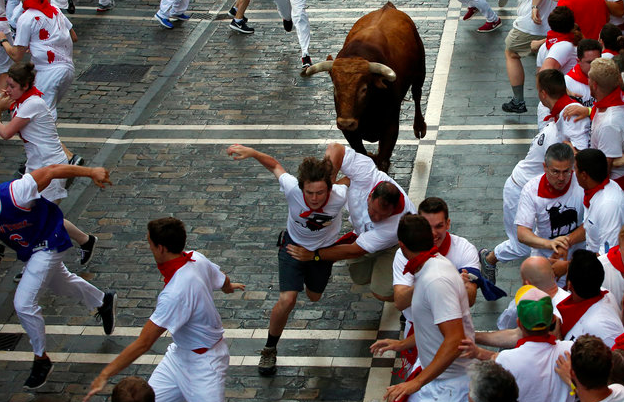 Spain’s annual running of the bulls began Thursday in the northern city of Pamplona despite animal welfare protests.

From July 7th to the 14th, six bulls and accompanying steer down are released each day to dash 930 yards down Pamplona’s narrow streets on their way to the city’s bullring while thousands of tourists and locals risk their lives to run with them.

Ernest Hemingway’s 1926 novel The Sun Also Rises drew international interest to the event. Animal rights welfare groups, however, are speaking out as bulls face almost certain death when they are stabbed repeatedly during afternoon bullfights.

Fortunately, tradition has been challenged, and some regions of Spain, such as Catalonia, are banning bullfighting. A poll at the time found that while 60% of Spaniards were opposed to buillfighting, 57% also said they opposed a ban as not to reject Spanish culture.

Animal welfare groups such as AnimaNaturalis and PETA have frequently protested both the running of the bulls and bullfighting. Both groups were represented at a demonstration Tuesday in Pamplona.

Five Americans have been hospitalized on day 2 of the festival, while others from Pamplona, South Africa, and Canada have also been injured.

Around 37 people were hospitalized during last year’s festival, and 15 people have been killed since records on the festival started being kept in 1910.

Previous articleLynx At Large After Escaping From Dartmoor Zoo
Next articleMan Lights Fireworks Near Dog, Later Charged With Animal Cruelty

Italian luxury fashion house Prada Group - and all its brands, including Prada, Miu Miu, Church's, and Car Shoe - has announced it will no longer use...
Read more
Breaking News

The harrowing images of more than 40 terrified cows running for their lives after escaping a slaughterhouse in Los Angeles, California, recently shocked the...
Read more
Industry News