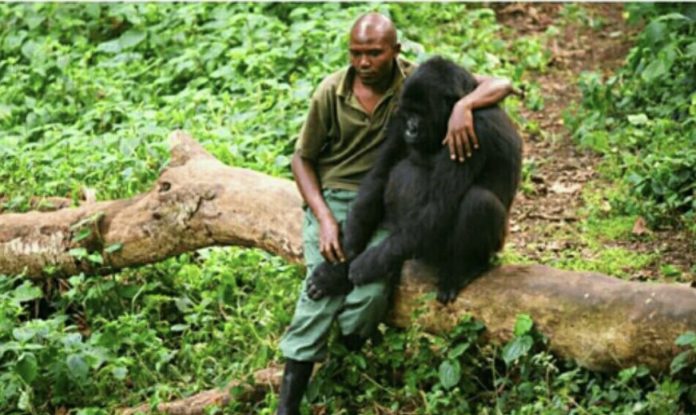 A heart-wrenching photo has surfaced recently, it shows a park ranger sitting and quietly comforting a gorilla.

This gorilla has sadly just lost its mother to poachers. The park ranger looks as sad as the gorilla. The rangers put their life on the line daily to protect these beautiful creatures, because of this, they view every last one as family.

In the photo, Patrick Karabaranga can be seen sitting with an orphaned mountain gorilla in Virunga National Park in the eastern Democratic Republic of the Congo.

The gorilla can be seen showing his appreciation for the sympathy by tenderly placing his hand on the ranger’s leg.

This gorilla is one of three orphans living in the sanctuary. They had to be brought in after their parents were killed, either by poachers or as a result of illegal attempts by traffickers to smuggle them out of the park.

This story is so important as a tale of love and loss but most of all, it’s a story of breathtaking compassion and understanding between animals and humans.

In another case of appalling animal cruelty, WAN has learned that an innocent puppy was recently left abandoned and buried in the hot sand...
Read more
Industry News

Snoop Dogg-Inspired Beyond Sausage Sandwich On A Glazed Donut Available At Dunkin’ Locations Throughout The U.S. Until January 19th

Snoop Dogg is continuing his enthusiastic promotion of plant-based pioneer Beyond Meat, once again collaborating with Dunkin’ by shining the spotlight on one of...
Read more
News