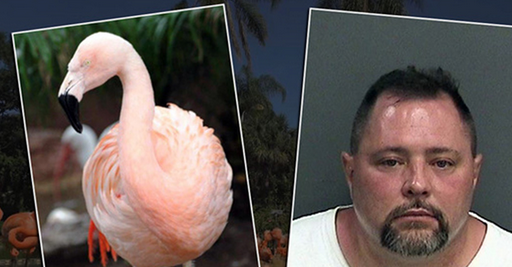 Tampa, FLORIDA-Pinky the flamingo was one of Busch Garden’s animal ambassadors. Tragically, she died on Tuesday after being attacked by a park visitor. His mother and two children were witnesses.

Joseph Corrao grabbed the flamingo and violently slammed her to the ground, injuring her to the extent that she had to be euthanized by the park’s veterinarians.  The Chilean flamingo was almost 20-years-old.

Corrao was previously arrested on charges that he shot and killed two chained dogs at point-blank range with a shotgun. He was charged this week on felony animal cruelty charges.

Police are unclear why Corrao grabbed Pinky, as he had previously grabbed another flamingo and left it unharmed. Alcohol could possibly be involved, but has not been determined as a factor. Witnesses stated that the man laughed after throwing the bird to the ground, and that his mother had yelled at him to put the bird down.

Corrao has an extremely long history of arrests for violent offenses in Florida, including child abuse.

Tampa Bay has mourned the beautiful bird. A park statement said that ”Pinky was a beloved member of the Busch Gardens Tampa Bay family and made many appearances on behalf of the park’s conservation and education efforts. She will be sorely missed.”

There are very few Chilean flamingos left. Native to South America, the Chilean birds stand between 3 to 4 feet tall and can live up to 50-years-old.

Busch Gardens is home to more than 250 flamingos on its campus. Most roam far from visitors.

Note: World Animal News does not support animals in captivity for the purpose of entertainment. Although some zoos and other wildlife centers open to the public do participate in conservation efforts, we must fight against captivity for financial gain.

Please contact Busch Gardens and let them know that they must update their policies to protect the welfare of the animals on their premises.

Denise Corliss Every day animal advocates fight tirelessly to save innocent animals from exploitation. On this day, in particular, WAN wants to recognize the heroic animals...
Read more
News

Photos by People For Animals, Hyderabad With the Bakrid Festival, also known as the Festival of Sacrifice, set to begin on September 2, 2017, animal...
Read more
Load more