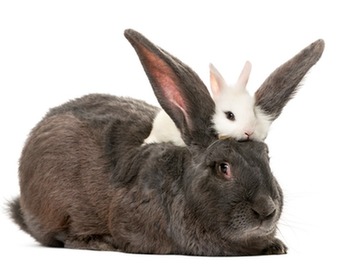 Easter is almost here and the idea of gifting a rabbit as a pet seems to come up every year.

As recent as last week, a group of animal welfare advocates touched upon the topic when speaking to the Los Angeles Board of Supervisors regarding some controversial code amendments made by the Department of animal care and control (DACC).

“People think they can dye the bunnies’ different colors for Easter,” said a Bunny World Foundation volunteer. “Bunnies are blinded, other times they’re poisoned because they groom themselves and the dye gets in them.”

A recent Care2 petition that initiated in the UK and generated more than 80,000 signatures to help shut down a pet rabbit farm before it even opened, also contributed to starting the worldwide conversation early this year.

Among its grievances, the petition pointed out that thousands of rabbits in the UK are killed each year, while some are simply dumped outside when their owners are tired of them.

The fact is, according to Care2, “Domestic rabbits are neglected in gardens, given to kids as toys, used for snake food, kept in horrific conditions by backyard meat breeders and inhumanely slaughtered every day across the globe.”

While rabbits remain a popular pet, the misconceptions about owning them continue to multiply.

An opinion piece posted on rabbits.org. explains that taking responsibility for the care of a rabbit is a 10-year commitment and is nearly as much work as a dog. Pet rabbits must be spayed or neutered, housetrained and the house, because they must live inside, must be bunny-proofed.

Animal welfare experts claim that many rabbit owners fail to meet the specific needs of rabbits; with some providing limited access to exercise space and next to no attention other than an occasional handful of food.

More often than not, it points out, people, particularly children, quickly lose interest because bunnies are not the passive and cuddly pets they believed them to be. This results in rabbits being neglected, abandoned or worse.

According to The Rabbit Welfare Association and Fund, “Countless unwanted pet rabbits are sold for next to nothing through classified ads both in newspapers and online as well as at livestock auctions.”

Instead of gifting a pet rabbit to a loved one this Easter, help a family in need!

Previous articleThe Animal Welfare Accountability And Transparency Act Has Just Been Introduced In The U.S. Senate Challenging USDA Database Purge
Next articleClose To One Hundred Protestors Gather After Shocking Stoning Of Crocodile To Death At Tunisian Zoo

New research released this week explores the loving relationship modern dog owners in America have with their pets. In honor of Valentine’s Day, Rover.com created “The Real...
Read more
News

A dozen cats have tragically been found mutilated in Washington state with the latest being discovered in Thurston County on Wednesday of this week. The...
Read more
Load more