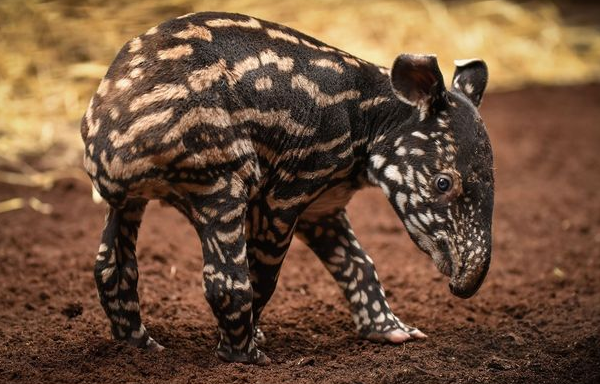 A rare Malayan tapir calf, Solo, has made its debut at Chester Zoo, a zoological garden at Upton-by-Chester in Cheshire, England.

Solo is the first of his kind to be born at the zoo, which represents success for the zoo’s breeding program, whose goal is to prevent the endangered species’ extinction.

The calf was born on July 11 to parents Margery and Betong.

Dr. Nick Davis, assistant curator of mammals at Chester Zoo: “Mum Margery performed a really smooth delivery and she’s doing excellently up to now, particularly with this being her first calf. We’ve witnessed Solo nursing for up to 20 minutes at a time and, although he’s still a little shaky on his little legs, he is doing well so far. This birth is very significant, a real achievement for our keepers given it’s a first for the zoo and important for the species as a whole.”

The Malayan tapir population has been listed as an endangered species as their population in the wild is estimated to have declined by more than 50% within the last 36 years. The losses have increased due to the invasion of their habitat into palm oil plantations and agricultural land. The species is also threatened by hunters and those who set snares for other animals.

Dr. Davis continues: “Once Solo is old enough, he will add valuable genetics to the European endangered species breeding program which is working to ensure a viable safety net population of Malayan tapirs, ensuring they do not go extinct.”

Today is #InternationalWhaleSharkDay! A day that was created to help bring awareness to these gentle giants. WAN talks with Shawn Heinrichs about the plight of Whale Sharks in Mexico. With...
Read more
News

(Main Image Not Of Actual Dog, Too Graphic) In yet another heartbreaking case of unwarranted animal abuse that turned fatal, an “ailing” pit bull was...
Read more
News

Your Signatures Are Needed To Tell Loro Parque Marine Park To Release Morgan And Her Calf To A Seaside Sanctuary!

Loro Parque, a marine park in Tenerife, in the Canary Islands just off the coast of Spain, is holding an orca named Morgan captive...
Read more
Load more