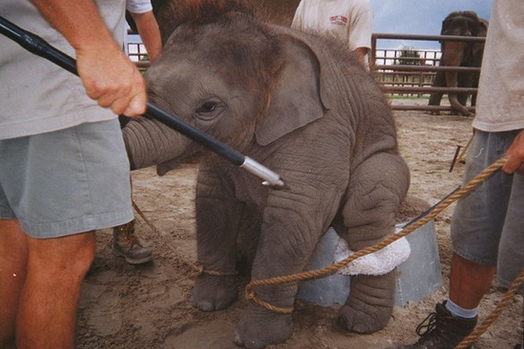 Rhode Island has officially become the first state to ban the use of bullhooks utilized by animal trainers to “break” their elephants.

Democratic Gov. Gina Raimondo signed legislation that bans the use of hooks in circuses and traveling shows.

Although dozens of cities previously banned the use of bullhooks, Rhode Island is the first state to issue a complete ban.

Animal welfare advocates have pushed for complete bans for some time, as these hooks often injure the elephants.

Although Ringling Bros. no longer uses elephants as entertainment, there is still a question as to whether they use the hooks legally at their company-owned elephant “sanctuary” in Florida. Many other circuses still use elephants in their entertainment acts, and presumably continue to use these hooks as part of their training practices.

The new law unfortunately does not apply to Roger Williams Park Zoo. A spokeswoman for the zoo calls the bullhooks “guides…used as part of our regular practice.”

Goodman claims that the ban on bullhooks (and the term itself) is part of a plan by animal activists to end captivity. He states that without these devices, animal handlers would not be able to properly manage their animals and could no longer keep their animals captive (And this is a bad thing?).

The measure will take effect in January.

The First-Ever Plant-Based Nutrition and Culinary Education Center Opens In The United States; Sign Up For Classes Today!

In response to a growing demand for information and how to get started crafting a plant-based diet, St. Louis, Missouri, will be home to the United States'...
Read more
News

Historic News! The Hometown Of PT Barnum, Founder Of Ringling Bros. Circus Becomes 2nd City In Connecticut To Ban The Use Of Wild Animals...

In the midst of the history-making midterm elections, another important vote was taking place in the city of Bridgeport, Connecticut, during which the City Council...
Read more
News