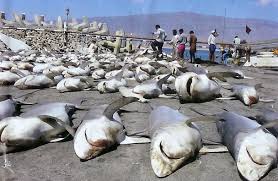 The Shark Fin Epidemic; Could Sharks Disappear In The Next 10 Years?

Speak Up For Blue

It lies there unable to move, it either starves to death or is slowly eaten by other fish. Without the ability to move and force water through it’s gills to produce oxygen, the animal dies an inhumane and gruesome death. Why will it die? Because the fins of these magnificent creatures are used to make soup. That’s right, soup, shark fin soup, a highly sought after Asian delicacy.

At $300 a dry pound, the demand for shark fins has ramped up the hunting of these creatures to the point of almost complete annihilation of some shark species. With over 100 million sharks being slaughtered every year to meet demands, some species have seen a decline of as much 60 to 90%. And with a lifespan of up to 20 years, the possibilities of seeing a resurgence in these fast declining numbers is practically impossible, which means, we could see the majority of these species hunted for their fins disappear completely within the next 10 years. The upset of this magnitude will completely disrupt the oceanic ecosystem for which sharks are absolutely crucial in maintaining.

These apex predators have been suffering a bad rap for years for their ‘man eater’ status, solely due to our ignorance, and more commonly from negative media portrayal and misinformed films such as that of Jaws and The Deep, where our entertainment has taken podium over the preservation of a species.

Would it interest you to know that more people are killed by soda machines toppling over and falling on them than by shark attacks?

Longlining is a commercial fishing method aimed at maximizing their catch. Long lines are trailed behind vessels and are anywhere from one mile, up to sixty miles in length. The line is buoyed by plastic floats and at intervals of around a hundred feet, secondary lines trail deeper into the sea. The entire line is baited with thousands of hooks loaded with squid, fish, or as the Sea Shepherd Conservation Society reports on their website, sometimes dolphin.

The line is left floating by the vessel. After a period of twelve to twenty-four hours, the vessel comes back and simply reels in the miles of longline. Reports estimate that almost 2 billion of these hooks are used every year, and they are illegal. The Humane Society of the United States (HSUS) reports the usual target fish for these longlines are swordfish, tuna, and Chilean Sea Bass; however, a large number of marine mammals including endangered turtles, albatrosses, dolphin, whales, and sharks are caught and inadvertently slaughtered by longlining. Up to 40,000 sea turtles, 300,000 seabirds, thousands of marine mammals, and millions of sharks die annually on longlines in our Earth’s oceans.

Sea turtles are amongst the most endangered creatures. The turtles are often attracted to the baited hooks, and they die after swallowing the hooks. This causes massive internal injuries, and the death is often slow and most likely agonizing. They can also get their flippers entangled in the longlines and drown if the section of line on which they are ensnared is bitten by a large fish and it swims downward in a panicked escape attempt.

Also attracted to the longline baited hooks are sperm whales, pilot whales, orcas and dolphins, who often get entangled in the lines and drown or swallow the hooks and die, in much the same manner as sea turtles. Even with the line being cut and the animal being released, the hook often causes major damage to the animals internal organs and they swim off to an almost certain and slow death.

This illegal practice of shark finning is very well the worst representation of longline fishing. Shark finning involves catching the sharks at sea and de-finning them while still alive and throwing the now finless and helpless shark, writihing in pain, back into the sea to sink and either drown or be eaten by other oceanic creatures. The mere image of this should be enough.

The documentary, “Sharkwater,” an eye-opening film by Robert Stewart highlights the fact that the shark fin industry sits behind only cocaine as the most profitable illegally trafficked substance in the world.

We are so oblivious and unaware. With over 7 billion people roaming this planet, the level of destruction we are causing is unsustainable. Every day we are slaughtering, poaching, killing and butchering these beautiful creatures for senseless trinkets while we indulge our acquisitive lifestyles buying expensive garments and gourmet meals, without a thought to the destructive machinations being perpetrated on the animals in question.

We are so self involved that we barely give a moment’s thought to the damage we are causing to our flora and fauna and in a blink of an eye it is all going to disappear, it will be gone for good, and the only blame to be allocated will be towards ourselves.

What will it take to make us pause, to think about what we are doing and possibly rethink how we can live our lives without all this senseless slaughter? Do we really need that fur coat? Is it that important to try the whale sushi that fishing boats massacre whales by the hundreds sometimes thousands?

Hopefully, one day, all life will be valued intrinsically and without consideration for what profit or incentive can be derived for our human gain.

It is our job to keep ourselves informed, as well as informing others.

Please, take the time to look at some of the below mentioned organizations who are trying to make a difference in protecting these and other valuable marine creatures, and if you feel so inclined, get involved, it all makes a difference.

A federal court in Arizona has ordered the Trump administration to release public records about how much wildlife is being imported into the United...
Read more
International News

Breaking! The Rhino And Lion Nature Reserve In South Africa Ends Cub Petting & Focuses On The Welfare Of Their Animals

As of last week, The Rhino and Lion Nature Reserve in South Africa decided to end their cub petting experience. For 30 years, the Rhino and...
Read more
News

Urgent! Fosters & Adopters Needed To Save 458 Pigs In Kentucky By September 14th; State Plans To Euthanize Any Remaining Animals After That Deadline

Photo from WKRC A woman who started an animal rescue in Pendleton County, Kentucky, became overwhelmed when the number of pot-bellied pigs in her care...
Read more
Load more