Filmed footage and photos released by animal welfare organization Animal Equality UK shows the shocking, and potentially illegal, conditions in which calves are housed on a dairy farm in Dorset, England. 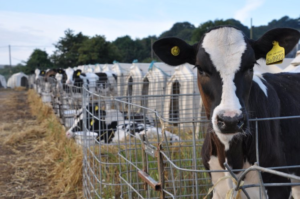 Despite animal welfare laws that ban the solitary confinement of calves older than eight-weeks-old, the shocking images reveal that the opposite is taking place at the Grange Dairy in Winfrith Newburgh, where young cows remain isolated in hutches that they have clearly outgrown. 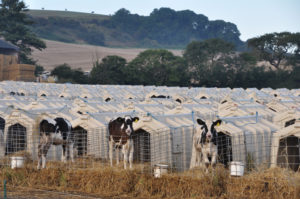 The farm, which supplies milk to leading supermarkets including ones owned by Marks & Spencer, which promotes itself as being “a leader in animal welfare standards,” denied claims that the calves have passed the eight-week-old mark, as did M&S; though both refused to report the ages of the animals.

The major British multinational retailer would only share that it was ‘disappointed’ by the images and is looking into the situation.

“Seeing row after row of baby calves alone in tiny pens, when they should naturally still be with their mothers, is truly heartbreaking,” said Dr. Toni Shephard, Director of Animal Equality in a post on its website, adding that it is urging retailers to sever their relationships with the supplier immediately. “But realizing that some of these young female cows have been confined like this for months on end without exercise or companionship is shocking.” 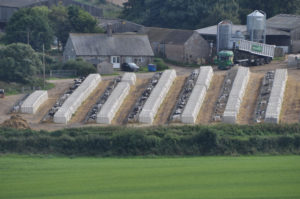 According to the post, there are an estimated 1,000 calves living at the farm which is owned by J.F. Cobb & Sons, which is part of a group of farms that supplies its clients with 240,000 pints of milk per day.

With “a constant supply of calves being an unavoidable by-product of milk production,” Grange Dairy rears female calves born on the company’s other local dairy units, who will eventually be sent to other farms to join a dairy herd. 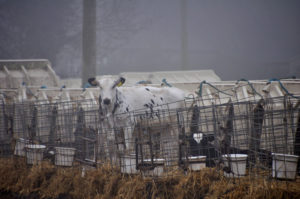 Horrifically, many of these captive calves are left with grazes and open sores on their backs from struggling to fit inside their cramped, small shelters.

Trading standards officers confirmed that the calves are older than eight weeks, based on information on their ear tags, and have begun an investigation.

The best way to help these and all other billions of farm animals is to go vegan!

Urgent Call To Action! Pregnant Elephant Dies In India Days After Eating A Pineapple That Was Filled With Explosives

Karen Lapizco - June 3, 2020
0
WAN is heartbroken to report the cruel and senseless killing of a pregnant wild elephant in Kerala, India. The elephant was believed to be 15 years...
- Advertisement -