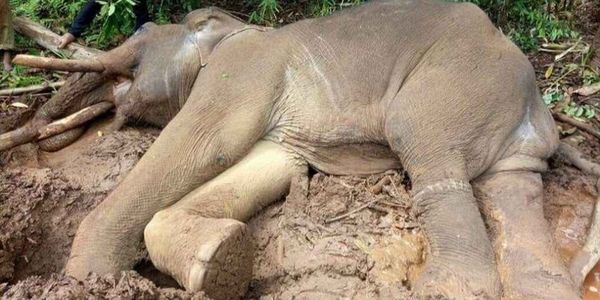 Sign Petition To Ensure The Man Who Starved His Elephant In Cambodia Is Held Accountable For The Animal’s Cruel & Unneccessary Death!

An elephant was recently starved to death by his owner in Cambodia who refused to feed him for a month as a punishment for ‘bad behavior.’

The 35-year-old elephant, named Beong Kok, sparked outrage when he got loose and ran through a village, damaging houses in Sen Monorom last month.

His furious owner caught him two days later, on March 28th, and refused to feed him, believing that weakening the elephant would stop the unpredictable behavior.

Sadly, wildlife workers found Beong Kok too late and were unable to save him.

Tragically, witnesses reported that the poor emancipated elephant had tried to get to his feet multiple times in the final hours before he simply gave up and died on the side of a muddy road.

Khun Diyon, a worker from a local elephant conservation organization who tended to Beong Kok, said the elephant had not injured anyone when he was loose.

Elephants are sensitive, intelligent creatures and should never be allowed to suffer like this. No animals should!

Cambodian authorities have apprehended Beong Kok’s owner and are investigating the case.

Sign this petition to call upon the proper Cambodian authorities to charge, try, convict, and sentence the cruel man who allowed Beong Kok to die such a painful and lingering death HERE!

Previous articleBreaking! 6 Black Rhinos Begin Translocation From South Africa To Chad In Central Africa Close To 5 Decades After Their Local Extinction
Next articleDog Reported To Be “Vicious” Rescued By Texas Police Department Turns Out To Be Cops New Best Friend

A shocking new undercover video produced by Compassion Over Killing (COK) graphically reveals the good, the bad and the ugly truth about what goes...
Read more
Industry News

James Middleton, Kate Middleton’s brother, is using his voice to advocate for animals. James currently has nine dogs, whom he credits with being his...
Read more
Load more