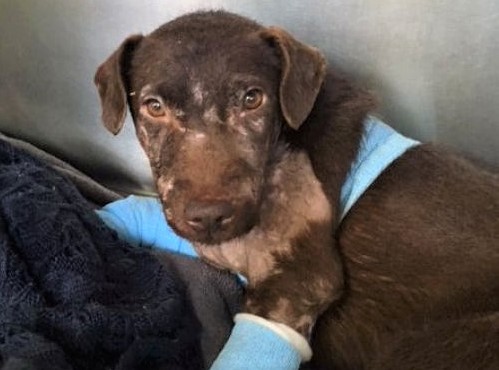 Snickers, a female Patterdale terrier, almost didn’t make it after recently being found abandoned in Smallfield, Surrey in the United Kingdom in a shocking state. Rescuers found her with wounds so severe and infected, they were impossible to suture.

Officials believe Snickers, like thousands of other unfortunate animals around the UK, were used as bait. In Snicker’s case, they believe she was sent down a badger den to flush out a badger so hunters could then kill it. This time, it looks like the badger got the best of Snickers and left her with wounds and scars that may last a lifetime. 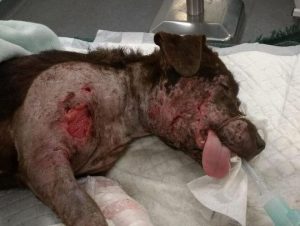 Badgers have long been vilified in the UK as carriers of tuberculosis. The government implements periodic culls leaving tens of thousands of the weasel-like mammals dead. It is this vilification that allows people to justify this type of cruelty. Not only for the badger, but for the other animals they use as bait, to attack and harass them. Snickers is just another victim of this cruel practice.

Even though Snickers has had such a hard life, rescuers say she is friendly and still wags her tail when she gets attention. While she has a long road ahead of her, she will eventually be okay.

What isn’t okay, is the fact that the person or persons who did this to her are still free. Even though badgers are considered by some to be a pest, badger baiting is illegal and so is animal cruelty, in general. Authorities must work to find Snicker’s abuser so that justice can be served.

Some Much-Needed Pawsitive News As The Troy Police Department In Michigan Introduces Its First Police Cat!

It was a close call, but on Friday police in Troy, Michigan, collared a new cat to fill an important position within the department. The...
Read more
News

Several people were apprehended today in Russia on suspicion of smuggling parts of endangered Siberian tigers, brown bears and other endangered species. According to a...
Read more
Featured Animal Spotlight