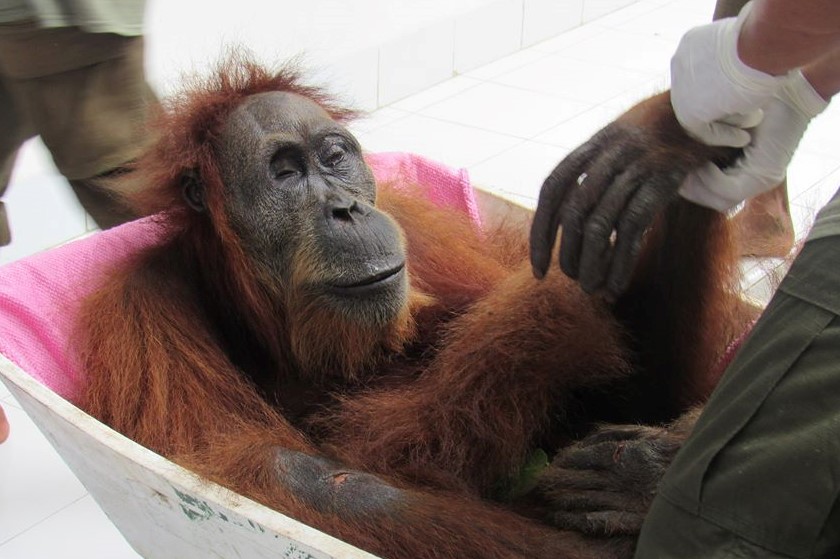 A horrific case of animal cruelty recently occurred in Indonesia when two teenagers shot a 30-year-old orangutan 74 times with an air rifle.

The brutal attack left the critically endangered orangutan, named Hope, blind and unable to ever return to her home in the wild.

Not only did Hope lose her vision, but she will forever have 64 pellets implanted in her body because removing them could cause her even more damage.

Most tragically, the senseless attack also resulted in the loss of Hope’s precious baby.

The two high school students, Ade Irfanta Sitepu, 17, and Salinsyah Solin, 16, were found guilty for carrying out the heinous attack.

What was even more shocking was the so-called punishment they received for taking the life of one innocent animal and devastating the other.

Both perpetrators were sentenced to community service which included reciting evening prayers for a month. They also had to clean a mosque and apologize to the police.

How is this an appropriate punishment for such a violent crime?

Sadly, the weak punishment for the juveniles will most-likely do little to prevent these abusers, or others, from callously attacking or abusing more sentient beings, which could eventually include humans.

According to a Facebook post by SOCP, Hope is now doing well at the Quarantine and Rehabilitation Center of the Sumatran Orangutan Conservation Programme (SOCP) where she will continue both her physical and psychological recovery.

To support SOCP’s work to save orangutans like Hope and the conservation of her species and their habitat in Sumatra, Donate Here!

Please sign this Care2 Petition to help ensure justice for Hope and to demand that the perpetrators face a punishment that actually fits their sickening crime. SIGN HERE!

Police are looking for a man who was filmed callously carrying a stranded dolphin off of a beach in southern China. The horrifying footage, taken...
Read more
Industry News

A sick golden retriever in the Michigan Petland store. Credit: HSUS 2019 Between September 2018 and April 2019, undercover investigators from the Humane Society of...
Read more
News

140 Species Of Snakes & Other Animals Seized In Nigeria

Earlier this week, customs officials in Nigeria intercepted several shipments that contained 140 species of snakes and hundreds of other animals that had been...
Read more
Load more